from Ionarts https://ift.tt/2K0mor8
via IFTTT 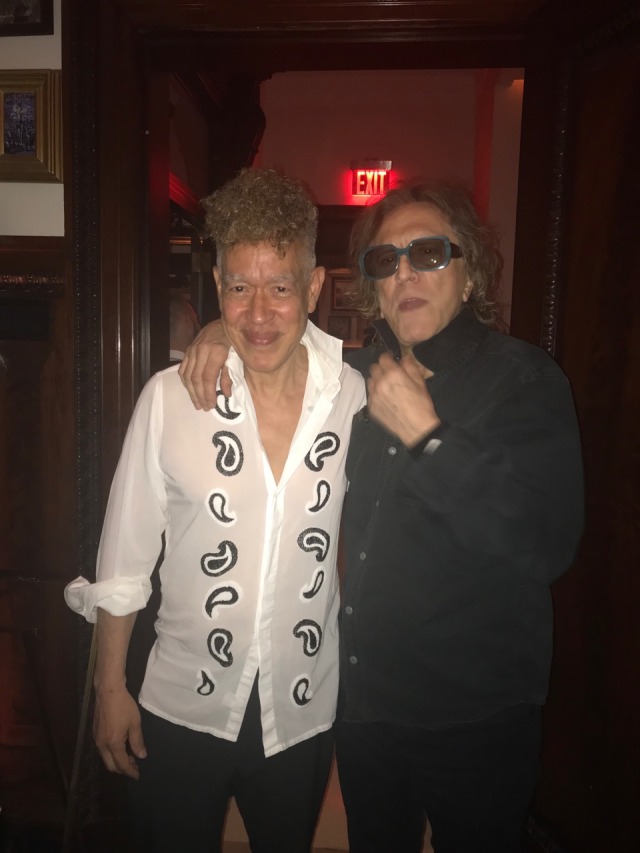 via The Real Mick Rock https://ift.tt/2yjr7xA

Finding our voices: An interview with Yatta 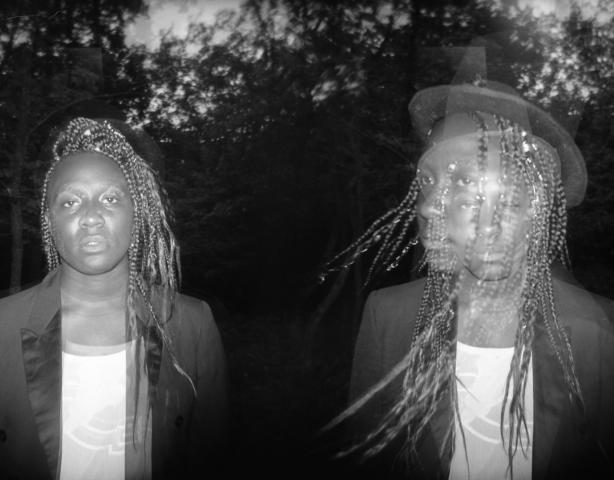 via The Wire: Home https://ift.tt/2Mi4stQ

Mark Kimber The Story of Interpol ‘Turn On The Bright Lights’

Following the horrific events of September 11th, 2001, New York was a scarred city that was determined to move on and rebuild. Members of Interpol had watched the scene unfold from the rooftops of their buildings and through the surreal spectacle of 24 hour news coverage. A strange atmosphere had taken over the city: unusually high levels of mutual kindness between strangers gave way to a new sense of clarity. Sam Fogarino recalls: “It was weird in the band, too. For a short period of time, it felt like, ‘Let’s just shake hands and move on. We’re not doing a record.’ Everything seemed so trivial.”

Turn On The Bright Lights had been written before 9/11, but the album’s songs took on a whole new layer of meaning in its wake. As Carlos Dengler theorises: “…we were holding the cards to a certain message that was about to become relevant. It’s insane. It’s like the universe is taking care of us, even in the form of a horrific event.” 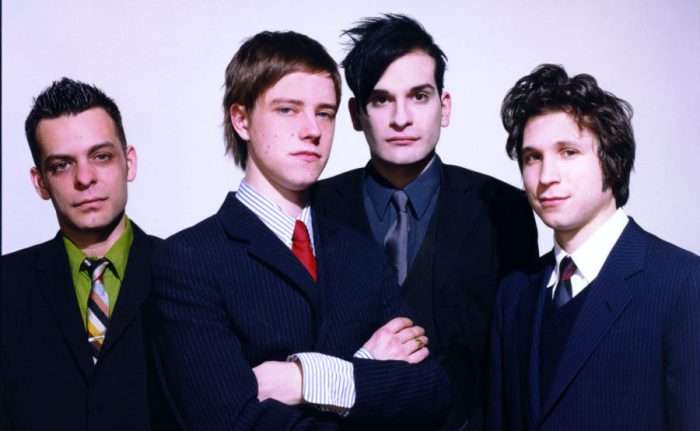 The band kicked off the recording process just over a month later, opting for the home studio of producer Peter Katis, far away in Bridgeport, Connecticut: an isolated location, removed from the social and narcotic distractions of New York. Turn On The Bright Lights marked the beginning of a longstanding relationship between Interpol and Katis – an accomplished, Grammy-winning engineer who would also record seven albums with indie-rock darlings, The National.

Amidst a sea of dilapidated houses and lonely strip-malls the band contented themselves with sleeping, drinking, and recording in the attic of Katis’s run-down house. Due to financial constraints, Interpol were in a race against the clock to complete the process before their limited stock of tape expired and their $900 budget evaporated. Nonetheless, the band’s songwriting process had produced an iron-clad set of compositions, which were, in theory, immune to the endless tinkering of the recording studio. They knew what they wanted; the mission was precise and predetermined.

But this didn’t always guarantee smooth sailing. Fuelled by copious amounts of booze and fired up by their own artistic prerogatives, tensions within the band charged a sweaty, volatile atmosphere. The main source of distress was the sonic direction of the album – as Fogarino recalls: “Carlos wanted all of his keyboard parts to be turned up really loud, and I would cringe over the overt 80s synth patch that he’d be using. I’d turn around to Daniel and go, “What the fuck? This is awful.” And then Daniel would just roll his eyes and I would end up leaving the room while shouting something.” 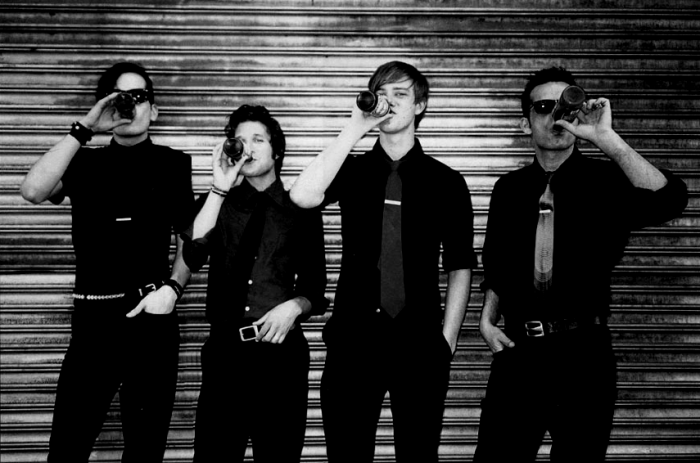 Nonetheless, this electrified tension injected the band’s late-night recording sessions with a simmering indignation that would ultimately permeate Turn On The Bright Lights. The push and pull between its component parts gave Interpol the tight and disciplined sound of a Joy Division re-imagined for the 21st century. Drummer Fogarino notes of his fellow bandmate Dengler: “If Carlos and I were books, he’d be a Nietzsche book, and I’d be a Hubert Selby book– totally different mindsets. But musically, it all fell right into place.”

Of course, extracting meaning from Interpol’s songs can be difficult due to the labyrinthine lyrics. As an English and Comparative Literature major, Paul Banks specialises in complex words, and he arranges them in a way that’s off-putting at worst (“I feel like love is in the kitchen with a culinary eye,” from “Obstacle 2”) and haunting at best (“In the bottom of the ocean she dwells, in crevices caressed by fingers and fat blue serpent swells,” from “Stella Was a Diver and She Was Always Down”). Ultimately, these turns of phrase enhance Interpol’s mystique, especially when interchanged with colloquialisms.

Although every song on Turn on the Bright Lights feeds into its romantic atmosphere, the heart of the album is its fourth track, “PDA.” For the first three minutes, the song rages with dual guitar, hammering drums, smooth bass-lines, and the elliptical line, “We have 200 couches where you can sleep tonight.” But after the second chorus, all elements drop out save the guitars, and we’re dangling in midair while the song shape-shifts. Gradually, the bass reappears and the drums thump like a revived heartbeat while the guitars spin to spiritual heights. In these final minutes of “PDA,” Interpol’s depiction of New York clarifies. 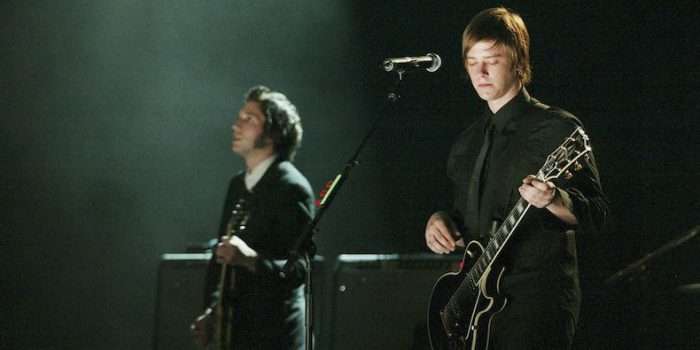 It’s the tension between you and a stranger in an otherwise-vacant subway car. It’s leaving the apartment on a Friday night, anticipation fluttering in your stomach and coursing through your arms. It’s the burnout of the last Bowery streetlamp. It’s the couple walking past art galleries and alleyways, their conversation broken and their minds distant. It’s the girl leaning over the sink to apply mascara, bored with the party unfurling outside the bathroom but obsessed with the others’ perceptions of her. It’s the guilt of staring downward while a man on the street talks to a cardboard box. It’s gazing upon rows of skyscrapers, realising that you wanted more from New York than the city could offer you. It’s hopelessness and impulsivity, worldliness and fascination, naivety and grief. It’s a stamp from the Lower East Side circa 2002, but ultimately, it’s steeped in the timeless tradition of navigating adult life.

The post The Story of Interpol ‘Turn On The Bright Lights’ appeared first on Classic Album Sundays.

1. Robert Arthur Moog set up the RA Moog Co in 1954 in Trumansburg, New York. The company made guitar amplifiers and Theremins before building its first modular synthesiser in 1964. It’s trademark sockets and wires was derived from early telephone exchange systems, as a means for creating temporary connections. The term ‘Moog’ quickly came to mean any type of synthesizer produced around the time by any manufacturer.

2. Moog’s synthesizer was initially adopted by experimental composers, but the machine’s breakthrough and commercial success came thanks to Wendy Carlos’s Switched-on Bach, performances of works by JS Bach performed on a modular Moog and recorded on an eight-track multitrack recorder.

3. Unsurprisingly, competitors to Moog quickly sprang up – in response to these, Moog developed the Minimoog, a portable version of the totally impractical modular model. The Minimoog was sold between 1970 and 1981 and its far more practical size made it popular in pop, rock and jazz. Its fourth and final version, Model D, became the Moog that everyone knew and loved.

4. The original Minimoog was cobbled together by one of RA Moog Co’s engineers, Bill Hemsath, who used discarded and spare parts lying around the office to build the prototype. Its distinctive, punchy sound was actually a result of a circuitry miscalculation, rather than by design.

5. The Minimoog was the catalyst for a new wave of electronic music in the 1970s and 1980s and had a massive impact on albums such as Michael Jackson’s Thriller, Herbie Hancock’s Rockit and hundreds more from Ultravox to Simon & Garfunkel. The 1990s even saw a resurgence in ‘vintage’ synths, since nothing at that time could reproduce the raw bite of the Minimoog’s analogue circuitry.

6. Original Moogs and Minimoogs in working order today can sell for thousands of pounds. But fancy a brand new Moog One? Moog’s first polyphonic analogue synth in over 30 years will cost you £7799. For hands-on experience with all models of Moog, you can visit the Moog Factory and Store in downtown Asheville, North Carolina, US or visit Andertons in Guildford, UK. And it’s pronounced ‘Moag’.

Faultress is our Artist Of The Week! The nom de plume of Rosi Croom, her music is truly captivating; a brooding mix of booming club-inflected beats and rhythms, cinematic soundscapes and delicately disorienting vocal layering. Her dexterous lyrical prowess is equally on display, exploring themes of loss, obsession and exploring what it means to be a woman today. One only needs a brief listen to our choice track, her latest single “Sanctuary”, to understand that this standout artist is one to watch:

The post Artist Of The Week: Faultress appeared first on Richer Unsigned.

from Richer Unsigned https://ift.tt/32Yjlr6
via IFTTT