Joe Meek [and the Blue Men] I Hear a New World – An Outer Space Music Fantasy (3CDs) (RPM/Cherry Red) Older Meek fans among us will doubtless remember when, with resounding trumpets and honking fanfares, the producer’s visionary I Hear … ►

from Goldmine Magazine https://ift.tt/2nbd9fh
via IFTTT

Listed are the upcoming record shows and events for October 2019 and beyond. ►

from Goldmine Magazine https://ift.tt/2mjXjOW
via IFTTT

Think of Elgar, and most likely you’ll think of Pomp and Circumstance, and the “Land of Hope and Glory” singalong that closes the annual Proms.  You’ll think of The Enigma Variations, or you might, if you’ve been keeping up to … ►

from Goldmine Magazine https://ift.tt/2nakL1B
via IFTTT

The October 11th BEHIND THE LENS event in NYC is CANCELLED, but will be rescheduled shortly. For… 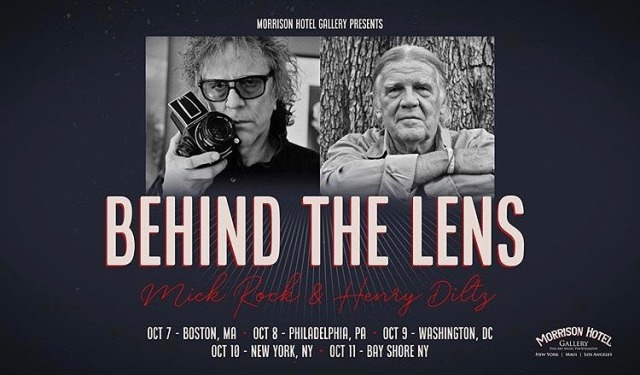 via The Real Mick Rock https://ift.tt/2naWUyH

Dina Ugorskaja, Photo © Ilja Kukuj
There was a darkness in the playing of pianist Dina Ugorskaja’s, these last few years, that made her interpretations of Schubert, Bach, and Beethoven and the likes fearsomely beautiful, harrowing, even menacing. It is hard not to look back on this now, and think that Dina Ugorskaja – daughter of Anatol Ugorsky – wasn’t impelled to darkness by her struggle with

from Ionarts https://ift.tt/2mWU3JT
via IFTTT

from Goldmine Magazine https://ift.tt/2mZMu5d
via IFTTT

Dave Thompson Where Are They Now? — Bananarama

Whatever happened to Bananarama? Well, wrapping up the summer with a studio album called ‘In Stereo,’ the duo Keren Woodward and Sara Dallin will release a live album, ‘Live In Stereo,’ this November for the proverbial cherry on top. Woodward talks more about the group’s rebirth. ►

The post Where Are They Now? — Bananarama appeared first on Goldmine Magazine.

from Goldmine Magazine https://ift.tt/2oHIuqx
via IFTTT

Goldmine1 Fats Domino mammoth box set ‘I’ve Been Around,’ due out November

Fats Domino is celebrated on Bear Family’s mammoth box set ‘I’ve Been Around,’ due out Nov. 8th ►

The post Fats Domino mammoth box set ‘I’ve Been Around,’ due out November appeared first on Goldmine Magazine.

from Goldmine Magazine https://ift.tt/2mYyKYq
via IFTTT

For the September instalment of our Unsigned Sessions, we were joined by two stellar acts: LVR and The King’s Parade!

First to the stage was LVR. Pronounced ‘lover’, Dan Evans has been working under this moniker for the past 2 years, taking a break here and there to write songs for names no one has heard of such as John Legend (!!!!), which has afforded him a bit more time to focus on his own stuff. With 3 singles in the pipes, and plans to take over a studio in Wales for the next 6 months, we expect to hear some pretty big things in the near future. Joined by his pal Lewis on guitar, LVR delivered a stripped-back and soulful set, with his powerhouse pipes bouncing off the walls! “The fact that you have a place for people’s music and a way to connect with fans is incredible”, said Dan of Unsigned’s work with artists. “Even if it turns into just 20 new fans, that’s 20 you didn’t have before and can lead to big things when it comes to touring.”

Rounding things off, we welcomed The King’s Parade to the Melomania stage. This London-based four piece–made up of Olly Corpe, Sam Rooney, Tom English, Chris Brent–have developed a style that combines classic Detroit blues with melodic, crossover pop since forming on a Hawaiian cruise liner in 2015. Following up on a couple EPs that Earmilk, Clash and Notion all loved, the band tells us their stepping into the hallowed halls of Abbey Roads to record their debut album! When we asked Olly his thoughts on what we do he said “It’s amazing! I think’s always reassuring for an artist to have a brand, a really good band, being there and saying ‘yeah, you’re doing a good thing’. Being unsigned, it can be hard to get that confidence sometimes.” The boys blew the roof off with their big bluesy sound and we can’t wait to see what the future holds for them!

As always, we want to extend a big ‘thank you’ to everyone who came through to support unsigned music, and of course to both bands for sharing their talents with us. See you next time!

from Richer Unsigned https://ift.tt/2n3j3Px
via IFTTT