CAS The Story of Kraftwerk ‘The Man-Machine’

I cannot remember when I first heard Kraftwerk, but it doesn’t matter as much of the pop music that I was listening to in my formative years was born out of Kraftwerk’s artistic mission – to make modern music using modern instruments. Bands and artists like David Bowie, Prince, Eurythmics, Joy Divisions and New Order, OMD, Ultravox, Depeche Mode, Human League and Gary Numan had an enormous impact upon me and without doubt, some of these bands may not have even existed had it not been for Kraftwerk.

Ditto Afrika Bambaataa whose 1982 anthem ‘Planet Rock’, the progenitor of the electro genre, sampled Kraftwerk’s ‘Numbers’. And without Kraftwerk, techno would have never developed.  According to techno pioneer Derrick May, Detroit techno was a… “complete mistake … like George Clinton and Kraftwerk caught in an elevator, with only a sequencer to keep them company.” 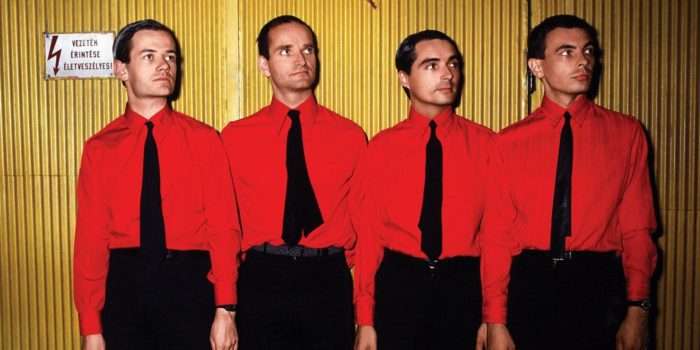 The futurist sounds of Kraftwerk were all around me, even if I was unaware of it.

Although Kraftwerk were forging a new radical sound, they too looked to the past as they built upon the ideas of artistic, cultural, and conceptual movements from the early 20th century: futurism, Bauhaus, musique concrete. Just like the founders of these movements (Marinetti, Walter Gropius, Pierre Schaeffer), Kraftwerk was primarily concerned with both reflecting upon and advancing their modern age. Kraftwerk co-founder Ralf Hutter once said, the question is, ‘What does Germany sound like today? That’s where we started.’

Kraftwerk was founded by fellow students Hutter and Schneider in 1970, after they had played around as The Organisation’ in the late 60’s. They wanted the music of this new incarnation to forge a new cultural identity for post-war Germany which at the time was regurgitating the popular culture of America. They weren’t alone as their Krautrock contemporaries such as Can, Neu, Cluster, Faust and Harmonia were also experimenting with new sounds and ways of music-making.

But Kraftwerk had the most defined mission. They built a concept around the menschmaschine (or human machine) powered by a Kraftwerk (power station). They played with German stereotypes like the efficient and emotionless worker – Hutter: ‘We define ourselves as sound-scientists, or as musical workers. Every day we go to the studio, work on the instruments, talk to the engineers – it’s not a musician’s existence, in the way of rehearsing with instruments.”

Having their own private studio, Kling Klang in Dusseldorf, gave them more freedom and time to experiment with the latest analogue technology like tape loops, echo and reverb machines and electronic oscillators. With engineer Conny Plank who also worked with many of their contemporaries like Cluster, Neu! and Harmonia Deluxe, Kraftwerk recorded three albums of what many considered to be little more than muso-noodlings.

Their fourth album, Autobahn, is the record in which they really found their footing and their ideas started to gel. This was to be their breakthrough album – their mass art statement. Although Hutter and Schneider’s intellectual and conceptual musings were regarded as high-brow- they were also fans of the sunny, American pop music that had dominated German airwaves in their own formative years.

They were fans of The Beach Boys and their finely constructed three-minute stories that explored the depths of the nascent teenager’s psyche. They took the Beach Boys ‘fun, fun, fun, till Daddy takes my T-Bird Away’ and Teutonised it into ‘Wird Fahren Fahren Fahren auf der autobahn’ or We drive, drive, drive on the autobahn – using a detached vocal style borrows from another German tradition – sprechgesang (spoken singing).

Both the single edit which hit the charts and side-long album version were extraordinarily ground-breaking when they came out in 1974; its effect cannot be underplayed. The legendary music journo Lester Bangs called Autobahn ‘more than just a record – it’s an indictment!’ and went on to say that Kraftwerk had recorded one of the most radical songs in Western Popular Music since Elvis Presley’s recording of ‘Heartbreak Hotel’ in 1956. 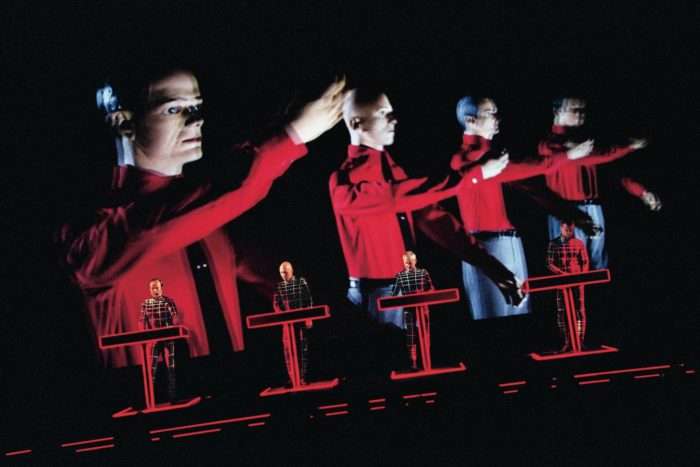 The following year they released Radio-Activity, their first album with Karl Bartos and Wolfgang Flür. This was a concept album based around the theme of radio communication and featured the mechanistic sound that would shortly come to define Kraftwerk – especially on the title track. They were making what Schneider called ‘tone-films’ with the aim to recreate realism. But as far as they were concerned, this wasn’t a cold kind of realism.

In an interview with Karl Dallas for Melody Maker, Hutter said, “We are ambivalent about the impersonal nature of modern life. On the one hand we are excited by the colossal scale and coldness of modern technology. On the other hand, we can be repelled by it. What we try to do, however, is to stay right in the middle, drawing feelings from both aspects. As a result, our music is at the same time impersonal, and also very personal.”

As they found the traditional drum kit, too noisy and not sensitive enough, they created their own electronic drum kit and patented it.

From a radio interview at the time Hutter said, ‘We first developed our music instruments from tapes and electronic oscillators and wave generators and filters in order to express our musical ideas. Today we can do it best with all electronic instruments. We cannot play science fiction music on the guitar – It’s an instrument that was invented in the middle ages in Spain. So, when we want do the spirit of today you have to choose the medium of today to do it. There is no difference between a musician and a technician.’

Their following album Trans-Europe Express marked their complete transformation into the Kraftwerk we know today. Not fully satisfied with the music technology that was on the market in the mid-Seventies, Kraftwerk had commissioned Matten & Wiechers from Synthesizerstudio Bonn to design and build the Synthanorma Sequenzer which was a 32-step, 16-channel sequencer they used to control the electronic sources which create the rhythmic textures on the album.

The song ‘Showroom Dummies’ became a big hit in discos and Kraftwerk were also getting kudos from David Bowie who proclaimed his love of the band and included a tribute to Florian with the song ‘V-2 Schneider’ on ‘Heroes’. This also brought the band wider popular recognition. 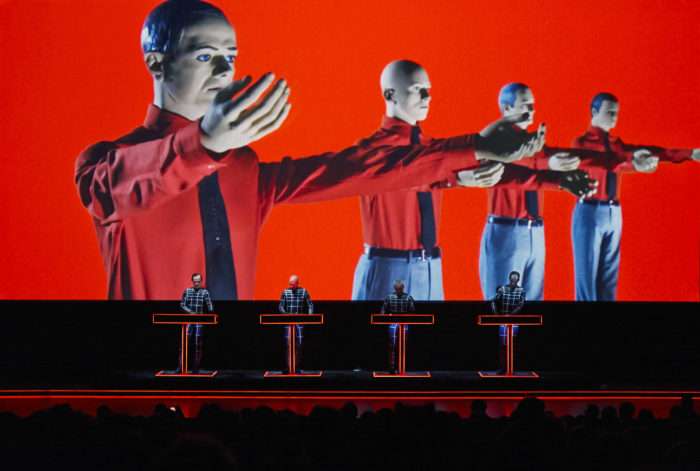 With a disco hit under their belt and wider popular recognition, the stage was now set for The Man-Machine, an album that would further refine their stripped-down synth-funk and that would become their most dance-able album yet.

The album was released at the peak of disco, and Euro-disco in particular was pushing the genre into more electronic territory and claiming a large slice of the American dance charts. French producer Cerrone had topped charts with the dance floor hit ‘Supernature’ in 1977. And the same year over in Munich, Italian producer Giorgio Moroder basically invented the trademark euro-disco sound when he produced ‘I Feel Love’ featuring a young American singer named Donna Summer.

So even if the pulsing beats that define The Man-Machine were an anomaly to the rock fans and critics who had been following Kraftwerk’s motorik beat in their Krautrock manifestation, the new synth-funk rhythms were more recognisable to the dancers who flocked to dancefloors worldwide every weekend.

The album opens with ‘The Robots’ which could be seen as their trademark song. It opens with the lines, ‘I am your servant, I am your worker’ spoken/sung in Russian and then the lyrics switch to German with ‘Now we are full of energy. We are the Robots, we work automatically, now we want to dance mechanic.’ At their concert, the song was often be performed by robots and is probably one of their most concise expressions of their obsession of the fusion with man and technology.

‘Spacelab’ is the only Kraftwerk song that deals with space exploration. In 1973 NASA launched their Skylab into the earth’s orbit and the European Space Agency commenced their own Spacelab project the following year (with their first mission taking place in 1981). In Kraftwerk’s 2018 performance in Stuttgart, they had a live link to the International Space Station which allowed German astronaut and Kraftwerk fan Alexander Gerst to speak directly to the concert audience declaring the ISS is a man-machine, the most complex and valuable machine humankind has ever built.

‘Metropolis’ refers to the 1927 German Expressionist science fiction film by Fritz Lang. It was set in a futuristic urban dystopia. As the eeriest song on the album, sometimes even menacing, perhaps this is Kraftwerk making a statement that used unethically, technology could also be humanity’s demise. As Kraftwerk were not into discussing their intentions behind songs, we will never know for sure.

‘The Model’ became their biggest hit, in fact it reached number one in the UK four years later as the B-Side to ‘Computer Love’ and the song most directly responsible for influencing the synth-pop of the 80’s. It refers to models, or in this case women who adapt the role of an artificial person, a mannequin, standing immovable whilst being photographed. 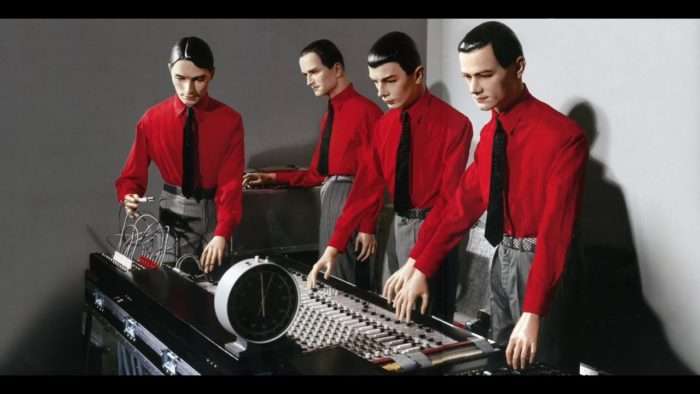 Both ‘The Robots’ and ‘The Model’ like the previous album’s ‘Showroom Dummies’ examines the idea of authenticity versus inauthenticity; human vs object; real vs artifice. In fact, this is the lens through which Kraftwerk’s efforts are also assessed: this is music made by computers and performed by robots – is that real? Is that human? Rather than give us answers, Kraftwerk are happy to pose the questions, and in the process they often take the mick out of themselves almost in a self-deprecating way.

Visuals became increasingly important through Kraftwerk’s life. Artist Emil Schult began his ‘artistic cooperation’ with the band in 1972 and contributed to lyrics and designed many of their album covers which became integral to the Kraftwerk concept and mystique. The Man-Machine album cover was designed by Karl Klefisch and was based on the work by Russian suprematist El Lissitzky.

He popularized the geometric and limited colour art form that sought to move away from the world of natural forms and subjects in order to access “the supremacy of pure feeling’ and spirituality. The back cover image is an adaptation of a graphic from Lissitzky’s children’s book called About Two Squares: A Suprematist Tale of Two Squares in Six Constructions.

When it was released in 1978, ‘The Man-Machine’ opinions were divided but critics were quick to notice this was a cultural milestone. Jon Savage noted in Sounds it was “probably the most completely, clearly realised conception, packaging and presentation of a particular mood since the first Ramones album”.

In Record Mirror, Tim Lott viewed it as more intellectually stimulating rather than emotive: “Their roots in technology are blatant in the six titles — ‘The Robots’, ‘Spacelab’, ‘Metropolis’, ‘The Modal’, ‘Neon Lights’, ‘The Man-Machine’. All are objects, things; nothing that is human. They are a compelling music unit, an obsessive beat machine that touches the scientific/mathematic parts of the brain without producing confusion in others.”

But in 1982, when it finally hit the charts and blatantly inspired every fresh synth-pop act going, The Man-Machine was recognised as both an artistic and musical turning point that was both thought-provoking and soulful.

A special thank you to Rock’s Back Pages for letting us access their amazing archive of pre-digital fanzine and magazine articles.

The post The Story of Kraftwerk ‘The Man-Machine’ appeared first on Classic Album Sundays.