“A camera is a wonderful ally. It requires minimal maintenance and provides entry to a world… 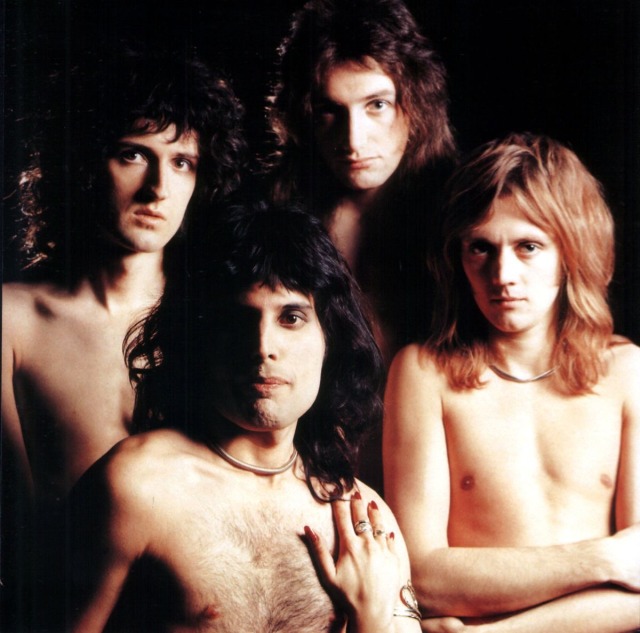 via The Real Mick Rock https://ift.tt/3kXHp5Z

Analogue Foundation brought together Classic Album Sundays founder Colleen ‘Cosmo’ Murphy and Channel One Sound System – one of UK’s most known and respected reggae sound systems. In this enriching interview hosted by Colleen, selector Mikey Dread and MC Ras Kayleb talk about many aspects of their work including; Channel One’s hand built sound system, the warm feeling of analogue sound and the dedication and passion behind the sound system lifestyle.

We are joined by the Queen Of UK Soul Beverley Knight at Kings Place in London to look back at two of her inspirations Chaka Khan and Aretha Franklin and the influence they have had on her own work.

We also have a look at her new album ‘BK25’ which celebrates her incredible career.

Alex Ebert tells the story behind the first album from Edward Sharpe and the Magnetic Zeros ‘Up from Below’. As part of our ‘Classic Albums at Home’ programme of online events, Alex discusses his own personal recollections of the album and why it has endured as a classic.

After the album presentation, we encourage you all to play the entire album from beginning to end, without interruption, on any format available to you. We ask that you follow the Classic Album Sunday listening guidelines: turn off our phone, refrain from conversation and give yourself over to the music.

We all need to look after ourselves during these challenging times and music can help. Listening to music can improve memory, aid healing, alleviate pain, decrease stress and more. With that in mind, we have created a weekly program of online events to ease anxiety, educate, connect and have fun!

Welcome to Classic Albums at Home.

The post Alex Ebert on Edward Sharpe ‘Up from Below’ – Classic Albums at Home appeared first on Classic Album Sundays.

Unknown On ClassicsToday: Fine Christmas Oratorio With Boys From Stuttgart

The easiest way of telling that Thanksgiving is near is when new releases of the Christmas Oratorio start rolling in. A look from desk to calendar quickly confirms this. Here we have Handel’s Company and the Stuttgart Hymnus Choirboys, along with a cast of lesser-known

from Ionarts https://ift.tt/3oUvPec
via IFTTT

“Film soundtracks and television theme tunes have long been a passion of mine. I remember the impact that theme tunes from my favourite TV shows — such as ‘The Avengers,’ ‘The Prisoner,’ ‘Mission Impossible,’ ‘The Saint,’ ‘Batman,’ ‘The Man From U. N. C. L. E. ,’ ‘Thunderbirds’ and ‘Doctor Who’ — amongst many others — had upon me as a little boy.

Having left school at 15 I was then fortunate to immediately land a job at a music publisher / recording studio who were renowned for their television themes / soundtrack catalogue. Those many afternoons spent inside darkened, smoke-filled recording studios in the late 1970s — observing at close quarters talented soundtrack composers and session musicians — certainly whetted my appetite for the genre. In recent years I’ve even established my own soundtrack company, Cineola; my latest score is for the controversial British thriller ‘Hyena,’ which opens this year’s Edinburgh Film Festival on June 18th.

What makes a soundtrack great? Well, it’s not just the melodies, rhythms and production quality of the music itself, of course, but fundamentally the way in which it interacts with the cinematography, the dialogue and the performances of the actors. A great soundtrack can create an additional dimension to the experience of watching a film by communicating between the lines of dialogue and the frames of celluloid. Music possesses a unique power to cut deep into the soul of human beings and consequently imbue a film with an emotional intensity it would otherwise be impossible for it to possess. But, on the other hand, what is the most wonderful soundtrack without a great film to accompany it? And the soundtracks I love the most also happen to form part of the films I love the most too.

Anyway, without further ado, and in no particular order, here’s my Top Five favourite film soundtracks — although truthfully any one of 100 other soundtracks could have appeared on this small list such as Bernard Hermann’s ‘Vertigo’ and ‘Taxi Driver’ or Ennio Morricone’s ‘Once Upon A Time In The West’ and ‘Once Upon A Time In America’ or Lalo Schifrin’s ‘Bullitt’ or John Carpenters ‘Assault on Precinct 13’ or Terrence Malick’s ‘Badlands’ … but I had to stop somewhere.” 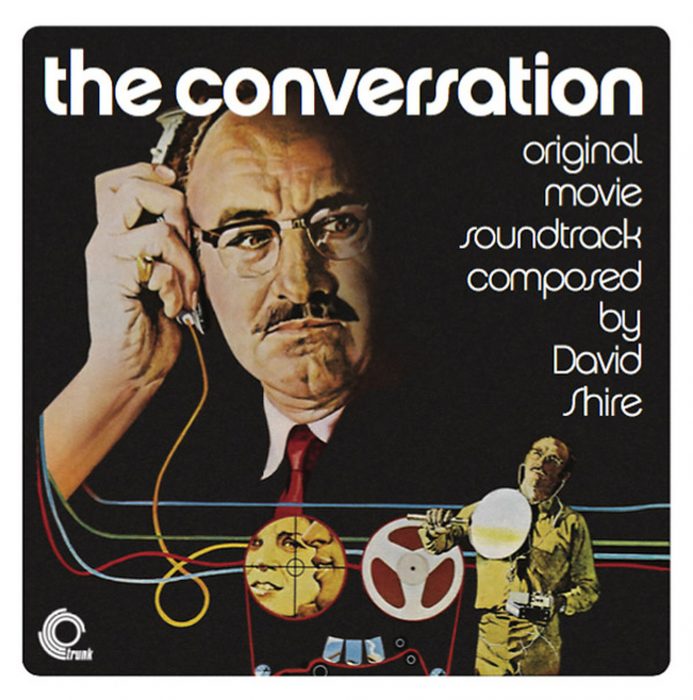 “David Shire created many soundtracks I enjoyed, notably ‘The Taking of Pelham One Two Three’ and ‘All The President’s Men ‘ but it’s his soundtrack for the Francis Ford Coppola thriller ‘The Conversation’ which stands out for me, in particularly the simple yet hauntingly beautiful piano motif which features throughout and expresses so much more emotion than a large bombastic score could ever have done. This soundtrack was also notable for it’s pioneering use of sound design and as the storyline follows the disintegration of Gene Hackman’s character, Harry Caul, into a frenzied state of paranoid isolation, the soundtrack pursues perfectly.”

Solaris Eduard Artemev – from the Andrei Tarkovsky film of 1972 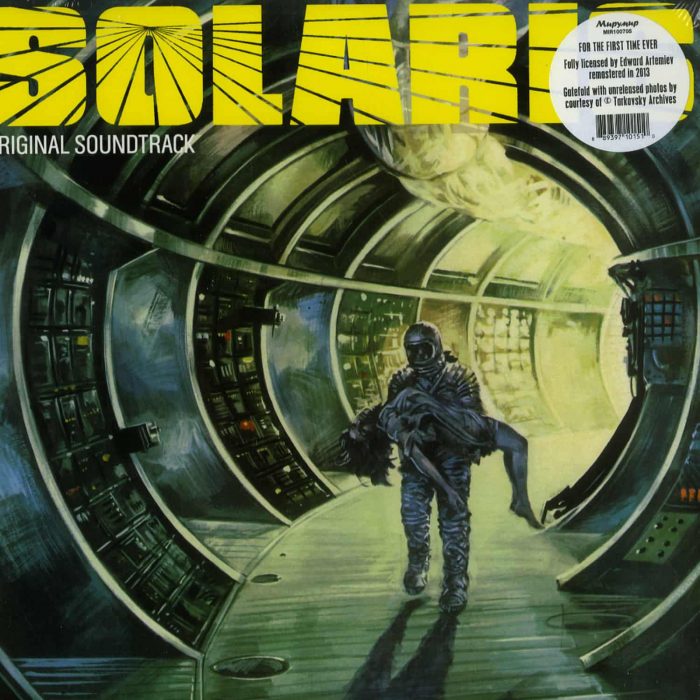 “Back in the early 1970s electronic music still had an exotic and rarified quality to it and none more so than the original soundtracks that the Russian composer Eduard Artemyev created for his compatriot the great Andrei Tarkovsky. In part the unique sonic signature of Artemyev’s early work may have been because he used old Soviet synthesiser technology and consequently was drawing from a different sonic palette to his Western counterparts. My favourite score of his is ‘Solaris’ but again it is impossible to divide the music from the images and this film is such a powerful marriage of sound, vision and emotion that it seems to tap straight into that secret little place our deepest dreams reside.” 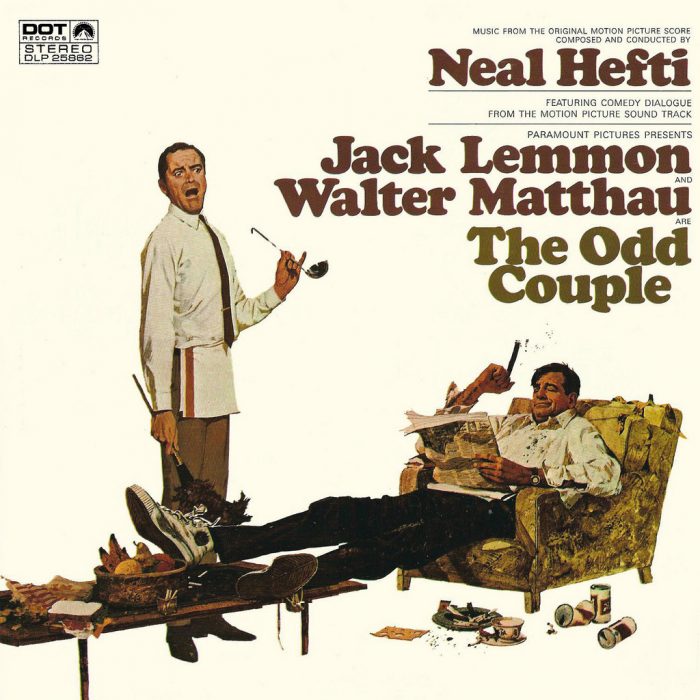 “Neal Hefti wrote some of my favourite film and TV themes, including ‘Batman’ (mentioned above) and ‘Duel at Diablo’ but the main theme from “The Odd Couple’ is my favourite. With its staccato keyboard intro it has a jaunty feel — though shot through with an underlying sadness — whilst upon their introduction the brass and string lines seem to sweep lazily across the Manhattan skyline to establish a unique emotion that’s impossible to hear without being transported straight back to Oscar and Felix’s atmospheric Manhattan apartment. My entire family loved the original movie from the first time we all saw it; especially the superb performances of Walter Matthau and Jack Lemmon and the sharp lines of Neil Simon’s script but the main theme played a crucial part in my affection for this film.”

Zulu John Barry – from the Cy Enfield film of 1964 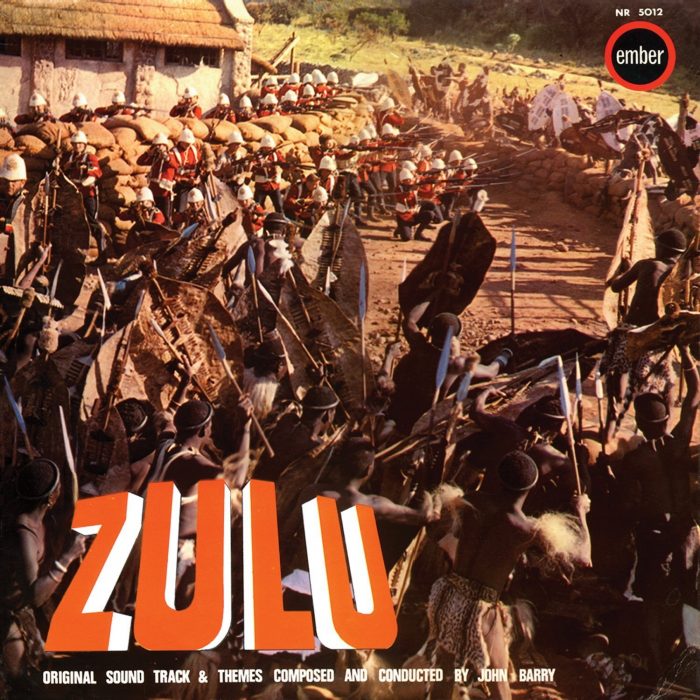 “Zulu was another film that was very popular in our household when I was a child. My brothers and I absolutely loved it and once again it is hard to untangle the sumptuous imagery — those scarlet tunics against the deep azure of the African skies — from the pulsating beauty of John Barry’s score. The core element of the main theme is so simple and yet so effective, especially when performed by an orchestra whose size conveys the massiveness of the battle that lay ahead. The most recognisable part of the theme is comprised of just a handful of notes that Barry had apparently based upon some indigenous Zulu songs and chants that the film’s director Cy Endfield had brought back from Africa. Barry was one of those truly great soundtrack composers who just knew how to zone straight in on an audience’s sonic-sweet-spot.” 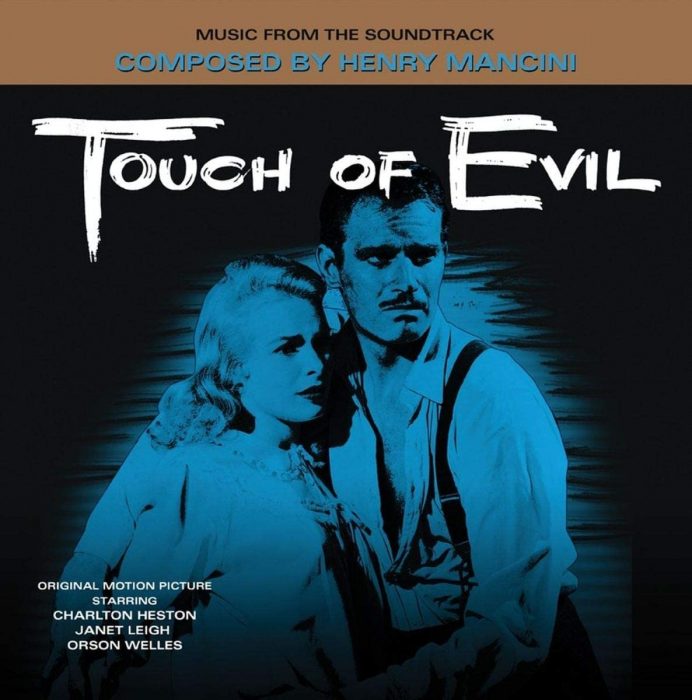 “I wasn’t born when ‘Touch of Evil’ was released in 1958 and only caught up with it in the 1980s, in fact, unusually, I had a copy of the vinyl before I even saw the film. I loved this soundtrack from the moment I first spun it on my record player and I was not disappointed when I saw the film the first time either. Henry Mancini’s bold, brassy score positively drips with sleaze and menace and matches every bead of sweat that drips from nearly every frame of Welle’s noir masterpiece. I was always quite disappointed on my trips to Tijuana to find that none of the bars I frequented had this album playing on their juke box!”

The former post-hardcore Million Dead vocalist turned punk-folkster has always been vocal about his love of metal. He even scored a first on Celebrity Mastermind answering questions about one of his favourite bands of all time, Iron Maiden. Frank is performing at this year’s Sonisphere and will be joining us for a Classic Album Sundays session presenting his favourite Maiden album on Saturday (more information here). Here he reveals his top metal albums of all time (three of which we are featuring at our Classic Album Sundays presented by Jägermeister sessions at Sonisphere). 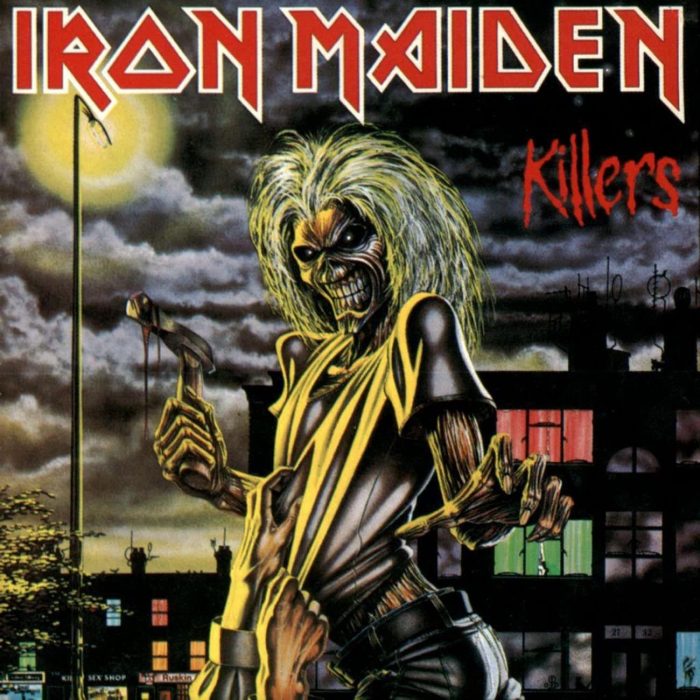 “Maiden were my first love, and you’ll be prising my Maiden records out of my cold dead hands. It’s a toss up between this, ‘Number Of The Beast’ and ‘Seventh Son of a Seventh Son’ for my favourite record of theirs.” 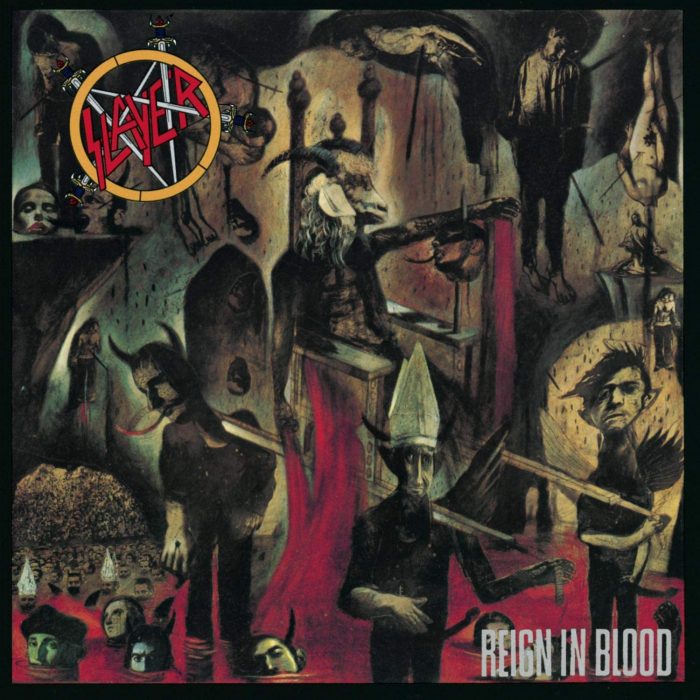 “I kind of think of this as the quintissential metal record. It’s intense, vicious, atmospheric and technical. They never topped it, in my opinion.” 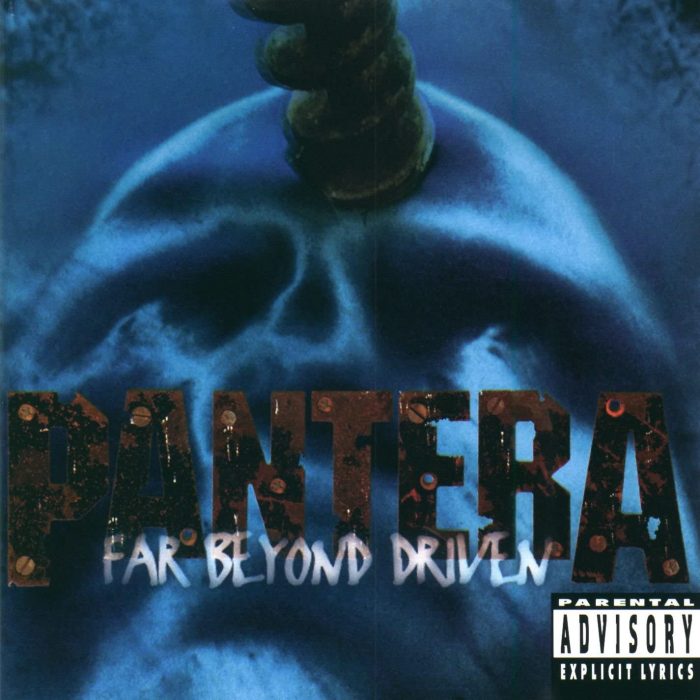 “Pantera were the fucking greatest, and this was their creative pinnacle, for me. They were head and shoulders above all other metal bands of their era, and Anselmo’s lyrics here have an oft-unappreciated intelligence.” 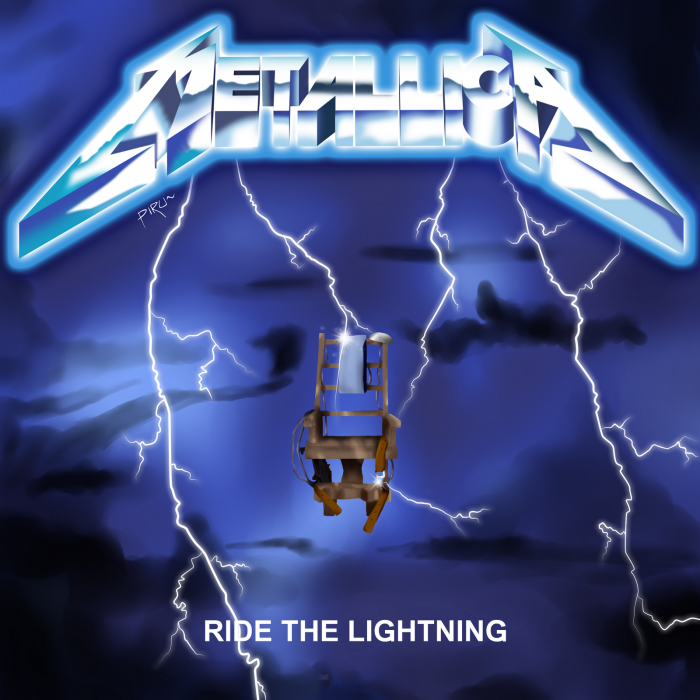 “You can’t really have a list of top metal records without Metallica now, can you? I learned how to play pretty much this entire record as a kid (or at least to fumble through the riffs passably). It’s a classic of the genre.” 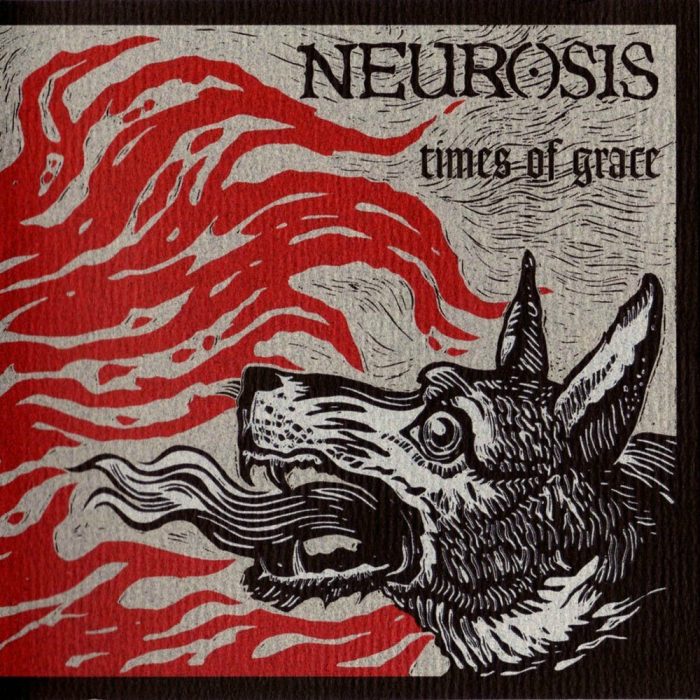 “I’m really into quite a lot of the weird subgenres that span off from metal – metalcore, grind, mathcore and so on. For me this is one of the first (and best) experiments with the limits of the genre, and is still a heart-stoppingly brilliant listen.”