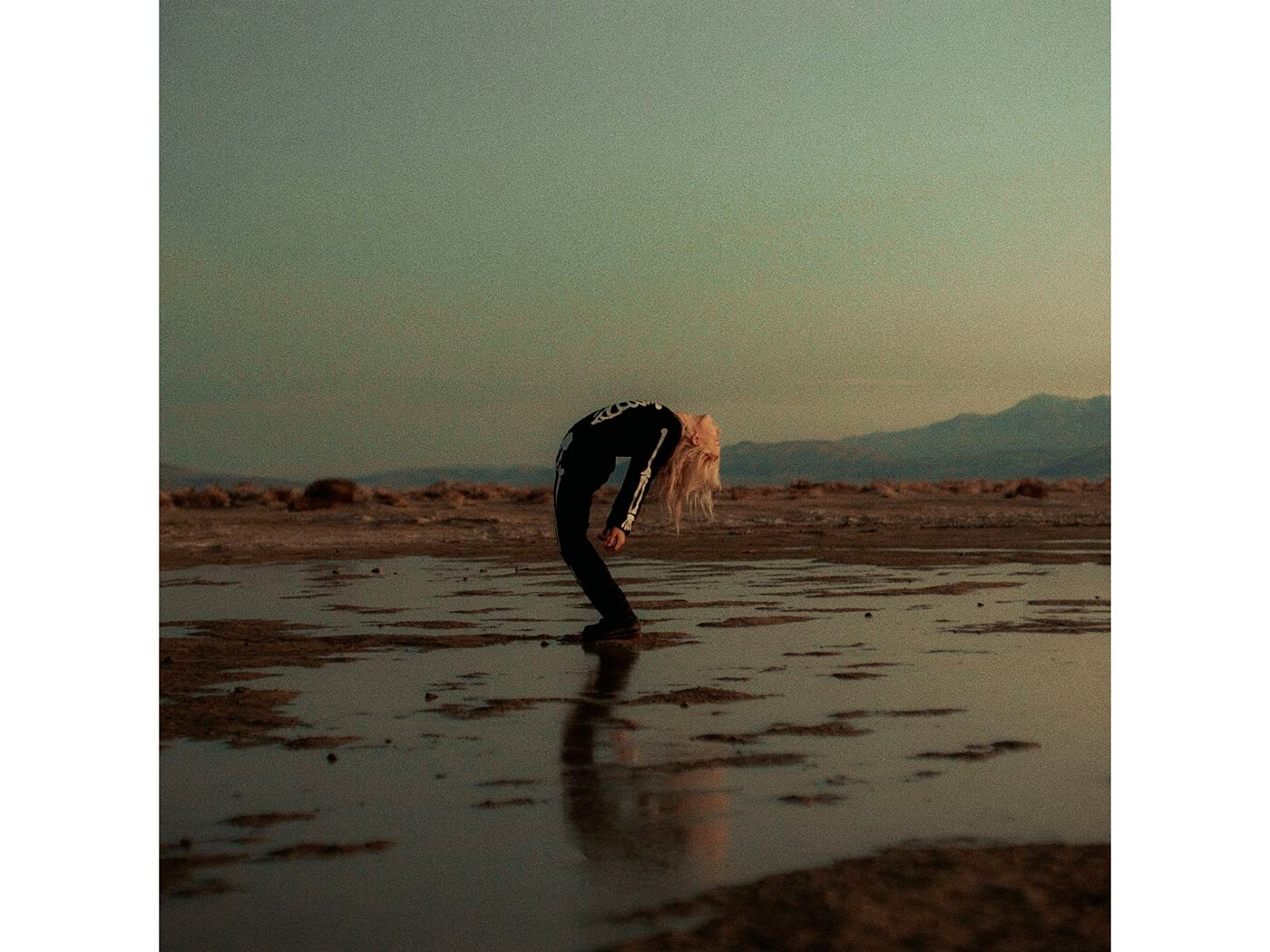 Copycat Killer is out next Friday (November 20) with the limited-edition vinyl available exclusively via Rough Trade (pre-order here). Listen to the new version of “Kyoto” below:

Pick up the new issue of Uncut to find out where Punisher figures in our end-of-year charts, and to read a candid and highly entertaining interview with Phoebe Bridgers about her meteoric rise. It’s in shops on Thursday or you can order a copy online by clicking here.

from UNCUT https://ift.tt/2UeFDli
via IFTTT 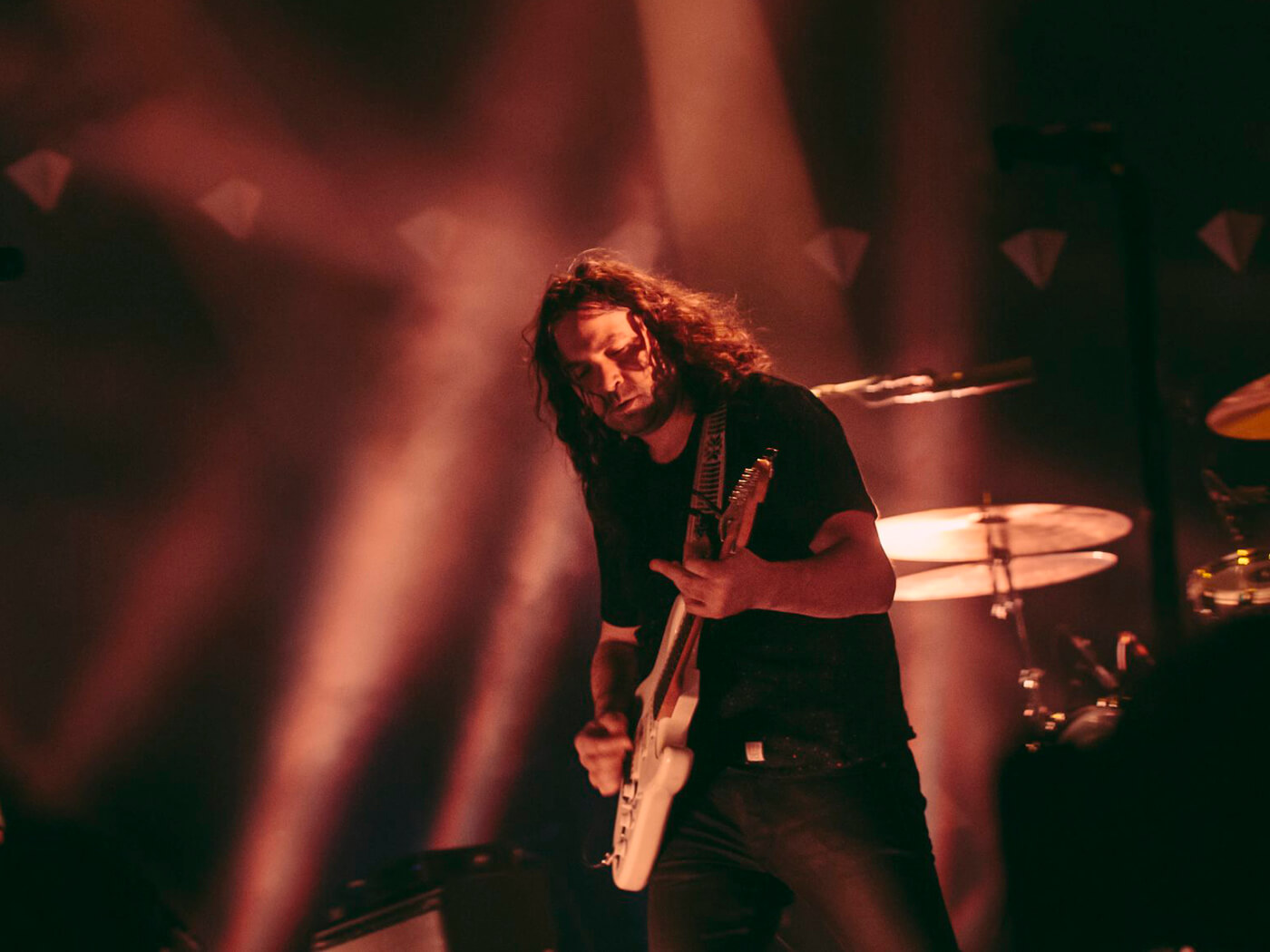 Last month we brought you the first taste of The War On Drugs’ new tour document, Live Drugs.

Now they’ve released their cover of Warren Zevon’s “Accidentally Like A Martyr” from the same album. Listen below:

Live Drugs is out on November 20th via Adam Granduciel’s own Super High Quality Records. Pre-order the album here and read Uncut’s verdict in the new issue which we unveiled earlier today – buy your copy here.

The post Hear The War On Drugs cover Warren Zevon’s “Accidentally Like A Martyr” appeared first on UNCUT.

from UNCUT https://ift.tt/3pfh7Pg
via IFTTT 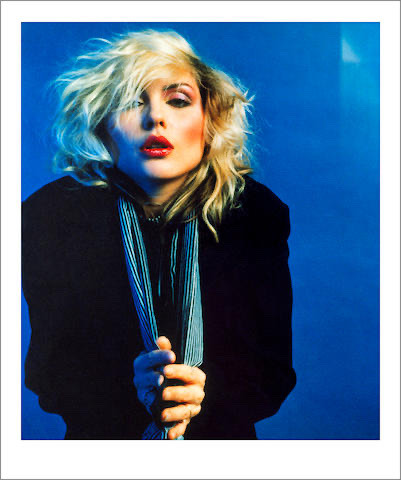 via The Real Mick Rock https://ift.tt/2Il3jlp

via The Real Mick Rock https://ift.tt/2Il3jlp

From the pedestrian opening chorus with its questionably delightful mix of all-over-the-place choristers, this Matthew Passion is utterly non-competitive and of interest really only to the proud parents and relatives of the little performers. The pitch

from Ionarts https://ift.tt/3p8Zf8y
via IFTTT 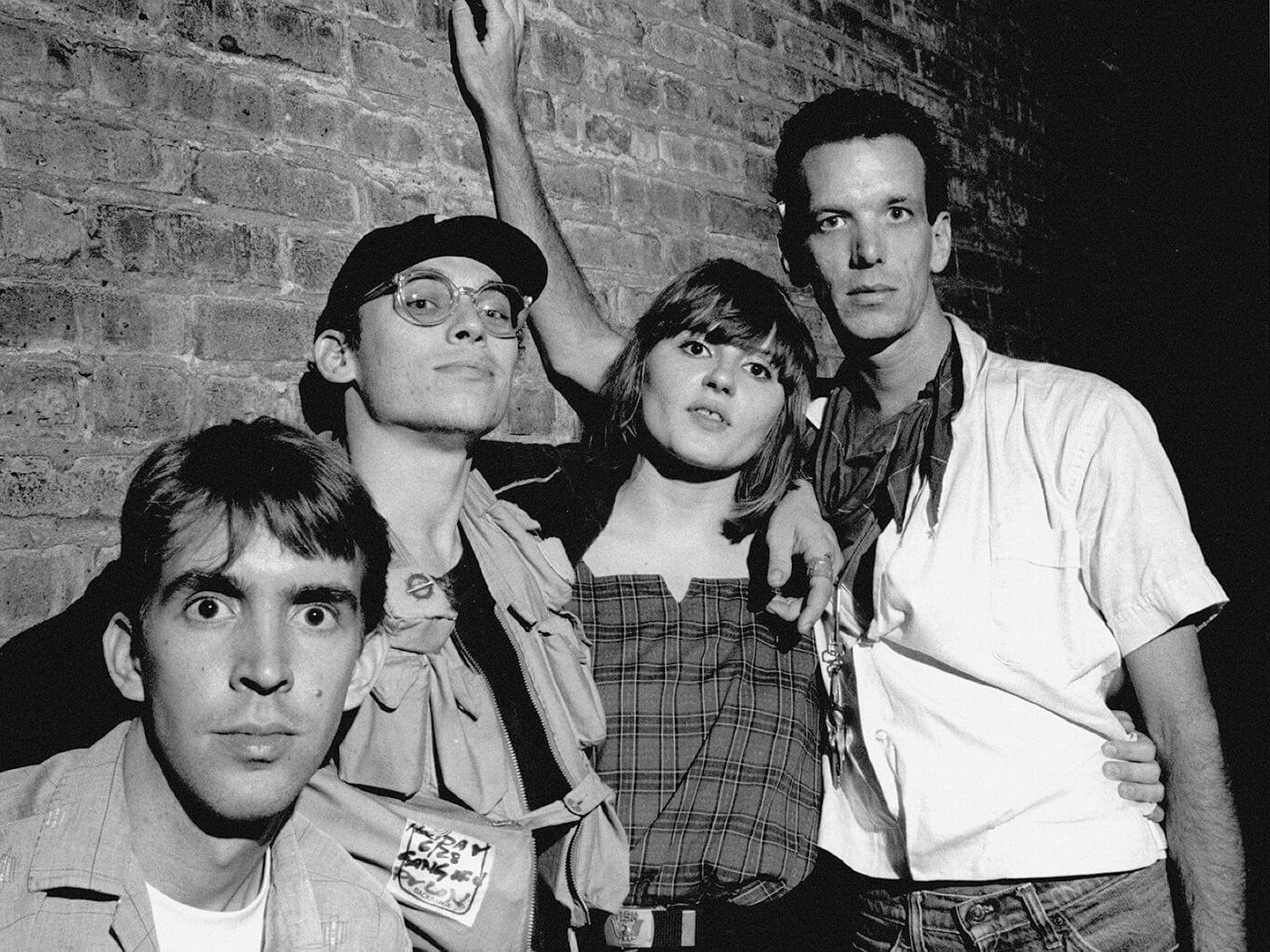 In the 200-page book that comes with this four-LP primer for the band’s original four-year run, many words are used to describe what Pylon did and why that mattered. The most effusive of these are provided by the many luminaries who were awestruck by Pylon’s energy and ingenuity. Jon King of Gang Of Four calls them, “One of the best bands we ever played with.” Hearing their records while in college, Sleater-Kinney’s Carrie Brownstein says, “I couldn’t believe they weren’t the biggest band in the world.” Adds Bill Berry of REM – whose cover of “Crazy” boosted the Pylon cult when it was included on the B-side of “Driver 8” and 1987’s Dead Letter Office – “To this day I haven’t seen a better live band.” And Michael Stipe places his Athens, GA hometown heroes in his personal Top 5.

In just about any other circumstance, the deluge of hosannas might feel a bit much. Indeed, bassist Michael Lachowski admits to Uncut that he initially resisted the idea of including the testimonials, fearing they might conflict with the band’s fundamental modesty and zero-fuss sense of practicality. But it’s forgivable here not just because of the praise warranted by Pylon’s insistently rhythmic, continually surprising post-punk racket – which can sound as thrilling as it surely did 40 years ago – but because of the sardonic humour and endearing humility that were as much a part of their identity as singer Vanessa Briscoe Hay’s growls and hollers or guitarist Randy Bewley’s spidery lines and serrated riffs.

This was not a band that was ever defined by its ambition. Indeed, Pylon’s one brush with the big leagues – opening for U2’s US tour in 1983 – was soon followed by their breakup, the four members having pledged to stop once the fun ran out. (Upon REM’s encouragement, Pylon reformed in 1989 and periodically reactivated until Bewley’s death in 2009. In recent years, Hay has also performed the band’s music in Pylon Reenactment Society.)

Instead, as Stephen Deusner notes in his excellent history in the Pylon Box book, the foursome’s attitude was more accurately captured in a term they coined in an early press release: “Feasible rock.” In other words, they were well aware of their limitations. After all, they were art students who learned to play partially out of a perceived need to fill the gap left in Athens’ music scene when The B-52s departed for New York in 1979. Gradually building up from the original duo of Bewley and Lachowski, they charged forward with heads full of Dadaist and conceptual-art notions and a suitably pragmatic name inspired by the safety cones at the DuPont plant where they worked on weekends. In early songs like “The Human Body”, Pylon can be heard piecing together a vocabulary that they can use to communicate with each other. While initially they may have borrowed bits from favourites in Britain (Buzzcocks, Gang Of Four, XTC, Slits) and on the Bowery (Suicide, Ramones), those unique limitations led them to fashion something that was their own. Born of their outsider sensibility, that lingua franca could eventually be discerned in everything from REM’s “Chronic Town” EP to the dance-punk of DFA Records, which acknowledged that debt when it re-released Pylon’s first two albums on CD.

The chance to hear Pylon develop that peculiar fluency may be the greatest pleasure of Pylon Box, which augments remastered vinyl editions of 1980’s brilliant, acerbic Gyrate and 1983’s fierce, funky Chomp with a wealth of previously unheard music. The greatest revelations lie in the Razz Tape, 13 songs recorded in the band’s first-ever studio session by Chris “Razz” Rasmussen of the Athens record store Chapter III. These embryonic versions of Gyrate songs and others they’d abandon are a testament to the physicality and unpredictability of Pylon’s music even at this early stage. On “Functionality”, Lachowski and drummer Curtis Crowe pound away like a mutant metronome as Hay and Bewley exchange skronks and squawks. Soon to be half of their debut single with “Cool”, “Dub” sees them careen between form and disorder before it all culminates in a collective cry of, “We eat dub for breakfast!”, one of many Hay lyrics that never fail to raise a crooked smile.

Together with the live tracks and demos included on the box’s Extra LP, the Razz Tape provides a vivid sense of Hay as a performer, making the case for her as one of the most exceptional frontwomen of her time and – as Corin Tucker attests – a heroine for the riot grrrl bands to come. In her note, The B-52s’ Kate Pierson fondly recalls the sight and sound of Hay “growling, shouting, squalling, writhing, spitting out esoteric lyrics while spinning wildly across the stage”. That’s the singer you hear in “Danger III”, an unbridled version of Gyrate’s PiL-like meltdown “Danger” recorded at Tyrone’s OC in Athens in 1981.

The Pylon Box is filled with moments that are equally exhilarating; evidently, what was feasible for Pylon was extraordinary by anyone else’s measure.

from UNCUT https://ift.tt/2GLtv88
via IFTTT 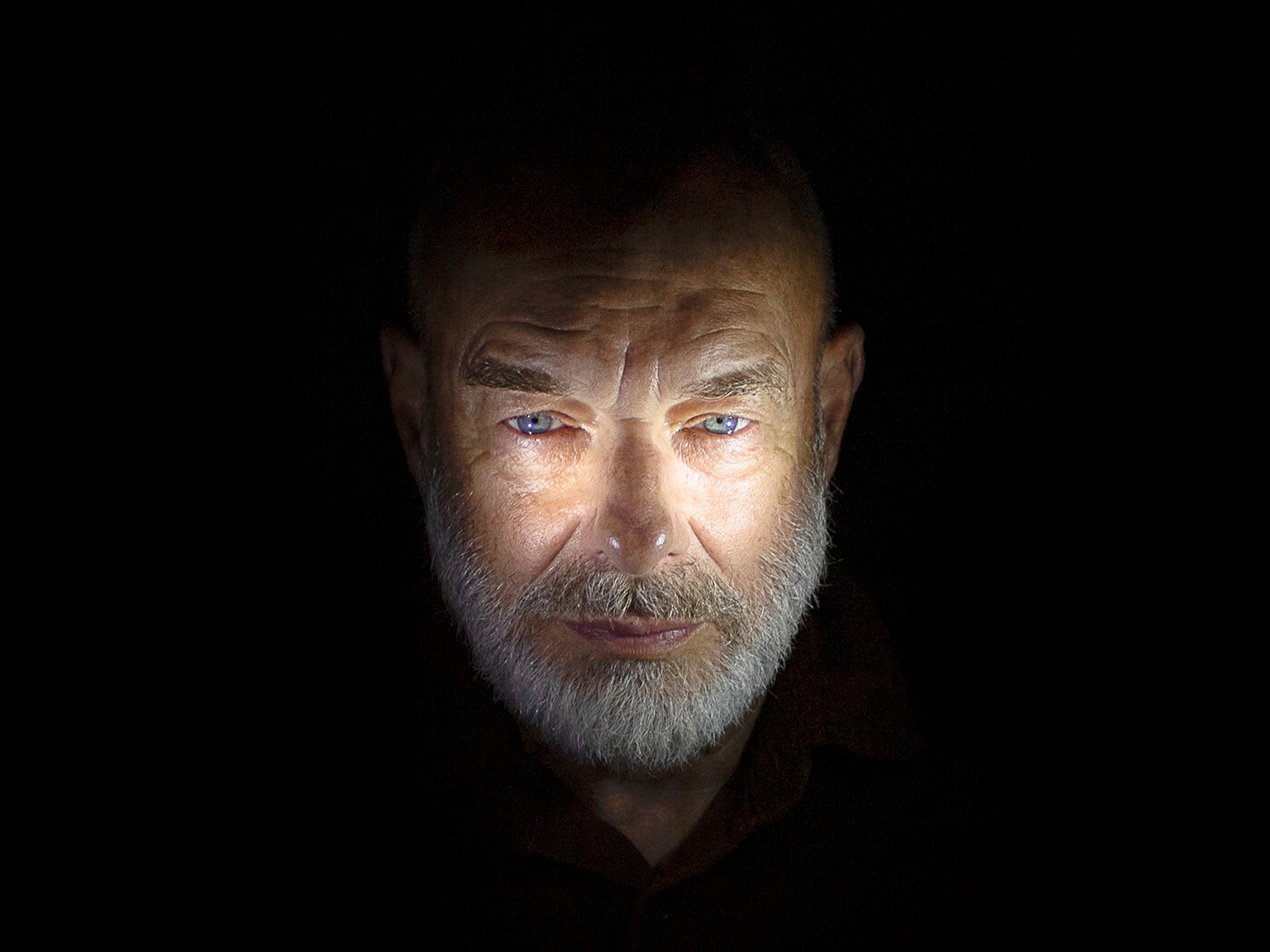 Brian Eno’s first collection of film and TV soundtrack work, Film Music 1976-2020, is due for release on Friday (November 13).

One of the tracks featured is “Decline And Fall”, taken from Henrique Goldman’s 2017 film O Nome Da Morte. Now Goldman has made a new video for the track, which you can watch below:

“Our video juxtaposes two cinematic narratives set in Brazil, one of the main frontiers in the final battle between man and nature,” explains Henrique Goldman. “The first comprises fragments of a drama about the tortured soul of the assassin portrayed in O Nome Da Morte, and the second depicts a magical natural phenomena – the Invisible River of the Amazon – a meteorologic process on a colossal scale, whereby rainforest trees continually spray billions of gallons of water into the atmosphere. An unforeseen, greedy and merciless force disrupts the divine stream of life. The same force drives the hitman, who stealthily steps out of the shadows to kill for money.”

The post Watch a video for Brian Eno’s “Decline And Fall” appeared first on UNCUT.

from UNCUT https://ift.tt/2Ue6CNS
via IFTTT 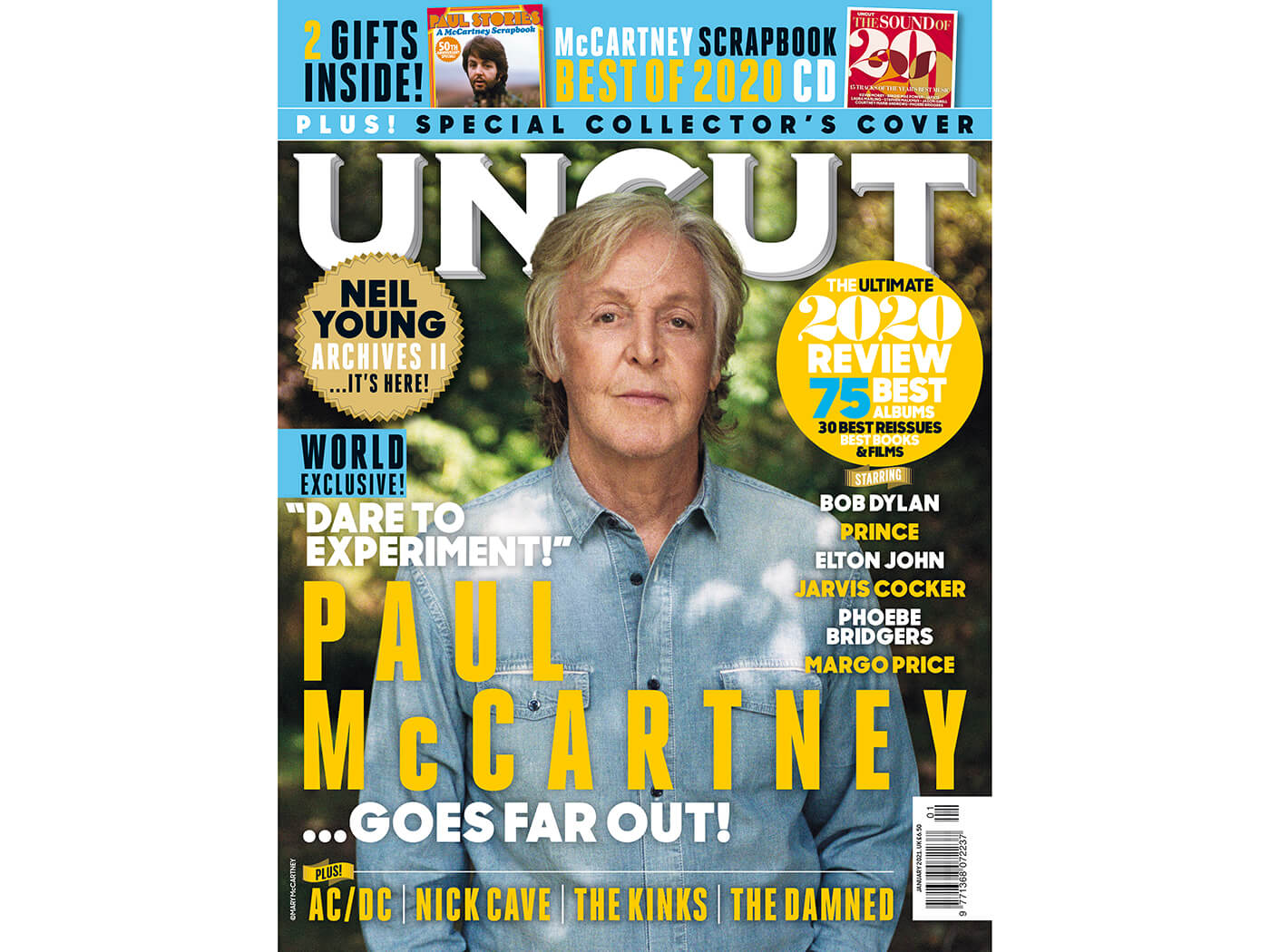 At the end of a strange and difficult year, it’s reassuring to find that some things remain constant. Like Uncut’s Review Of The Year, for instance – which occupies 35 pages in this month’s issue. Within it, you’ll find our Top 75 New Albums and Top 30 Reissues, as well as Best Films and Books of 2020. This year’s list has been compiled from charts submitted by 52 contributors (a record number, I think), who voted for 400 new albums and 170 reissues. There are also interviews with some of the artists who’ve helped shaped 2020: Elton John, Jarvis Cocker, Phoebe Bridgers, Afel Bocoum, Margo Price, Drive-By Truckers and Moses Boyd.

What else? Well, OK, so we also have a pretty amazing exclusive interview with Paul McCartney. As you’ll know, McCartney has a history of opening up a new decade with an act of musical reinvention – and 2020 is no exception, as he reveals McCartney III in depth in the pages of Uncut. There are other revelations ahead – we learn, for instance, that he still mentally consults John when he hits an obstacle during songwriting – but what struck me most is the reflective, grateful-for-a-good-life tone that runs through the interview. There’s a swathe of lovely, unseen photos, too. 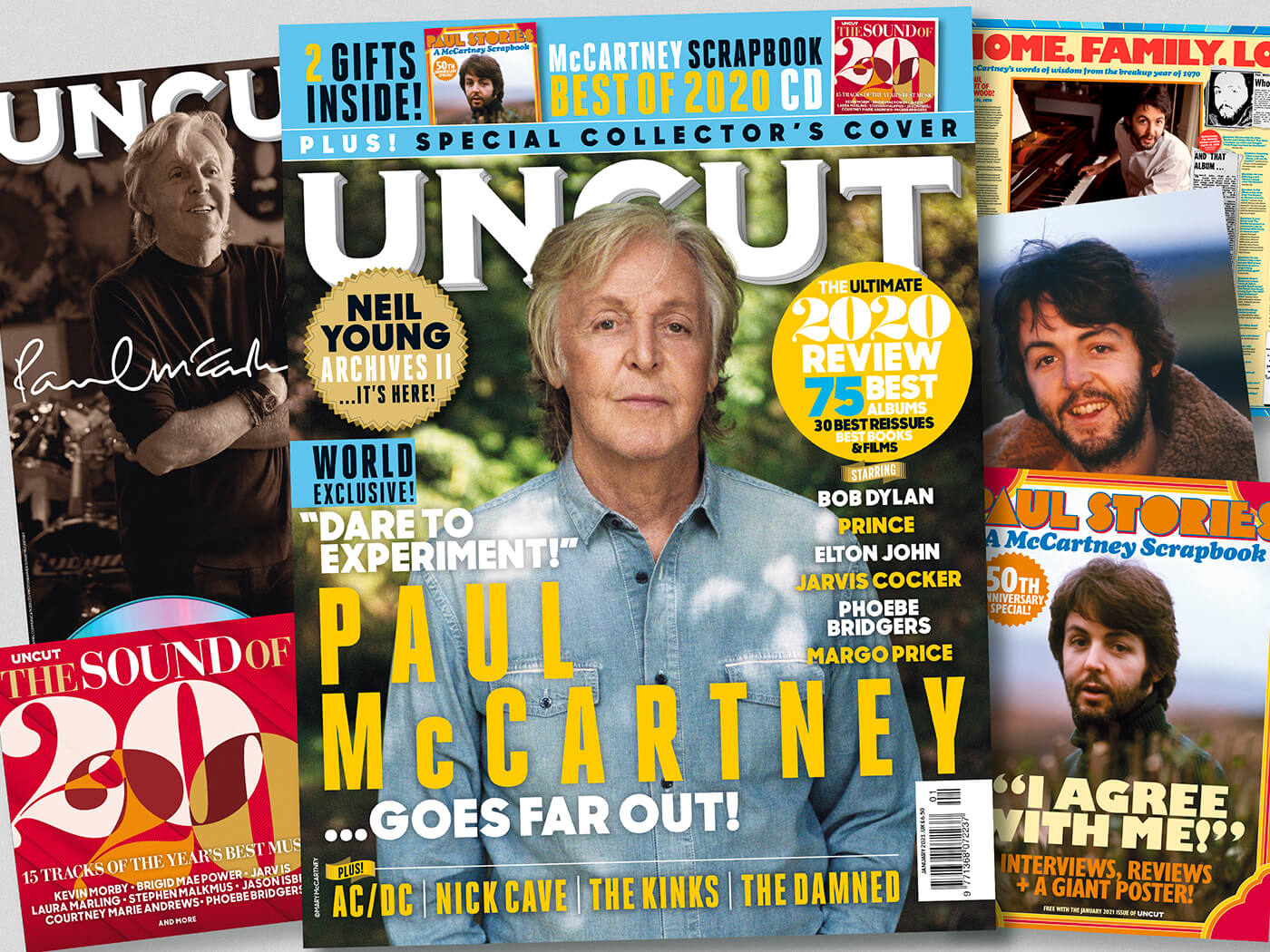 Sharp-eyed UK readers will also note that this issue comes in a posh bag, intended to keep safe a number of gifts. Inside the bag, you’ll find an exclusive Paul McCartney Collectors Cover and our free CD rounding up 15 of the best tracks from 2020. There is also our bespoke McCartney Scrapbook that brings together rarely seen pieces from 1970, taken from the pages of Melody Maker, NME and Disc And Music Echo, as well as Paul’s famous Q&A that accompanied the release of the first McCartney album.

The bag, Scrapbook and Collectors Cover are available with worldwide subscriber, UK newsstand and online-purchased copies.

Fanfares and alarums, please, for our intrepid art editor Marc Jones for his sterling design work on the bag, poster and assorted covers. Talking of which, American readers should also look out for another exclusive McCartney cover on sale in Barnes & Noble from early December.

Anyway, do let us know what you think of the issue once you’ve had a chance to digest the various polls – drop us
a line at letters@uncut.co.uk. You can also join the Uncut discussion online at forum.uncut.co.uk.

The post Paul McCartney and The Review Of 2020 in the new Uncut appeared first on UNCUT.

from UNCUT https://ift.tt/2Il5BAQ
via IFTTT 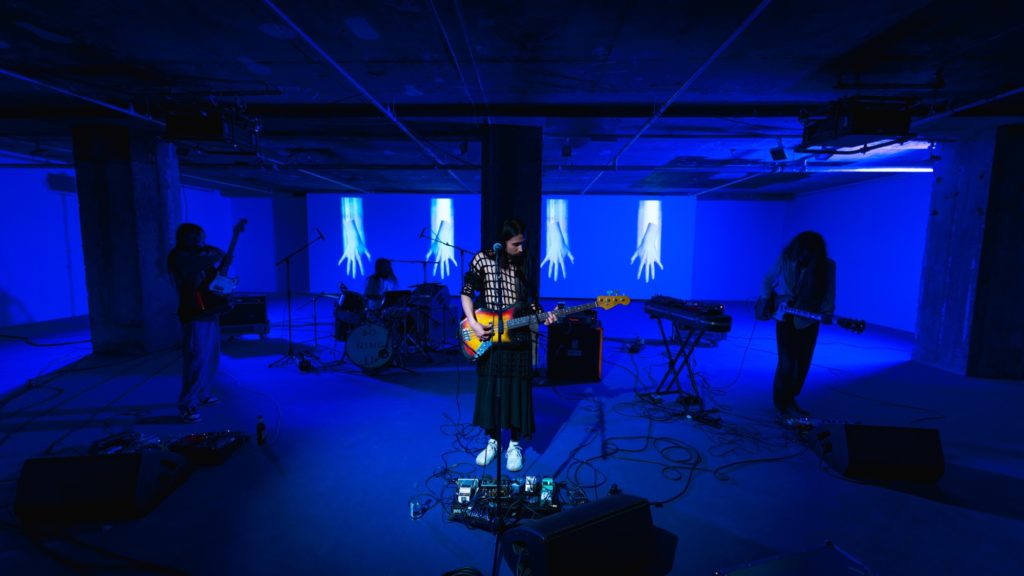