​The Stone Temple Pilots guitarist discusses how a remote setting, a commitment to pop songs, and a lack of ego played a part in creating the band’s kaleidoscopic third album.

from AllMusic Blog https://ift.tt/3rxj8YN
via IFTTT 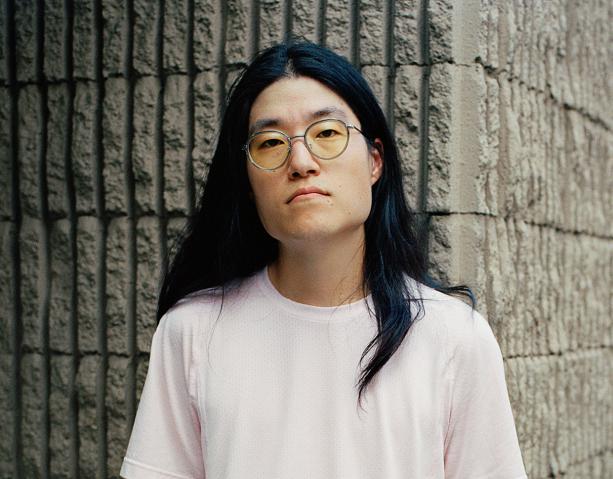 via The Wire: Home https://ift.tt/3kzZZne

from Alex Ross: The Rest Is Noise https://ift.tt/36Jbp07
via IFTTT 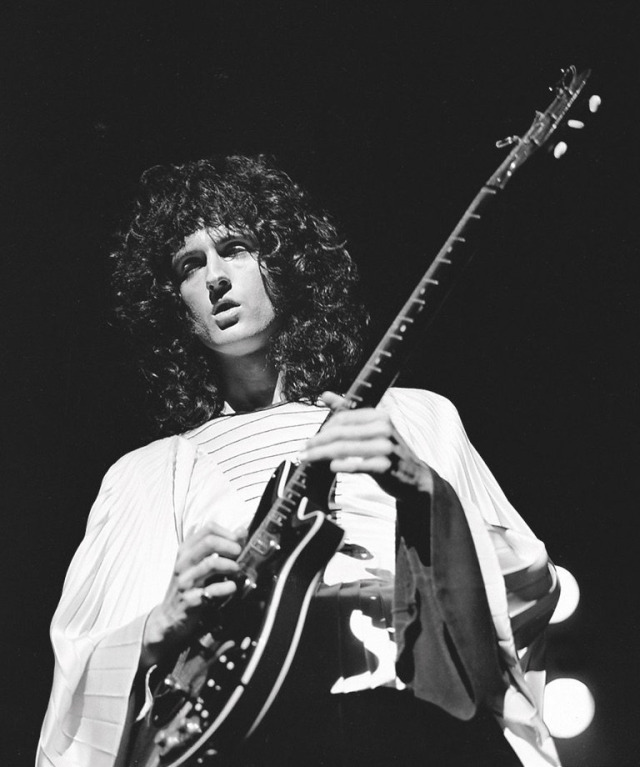 via The Real Mick Rock https://ift.tt/3BiaFNg 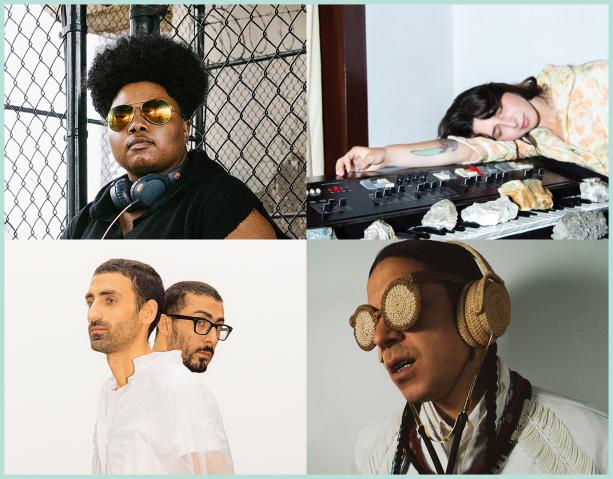 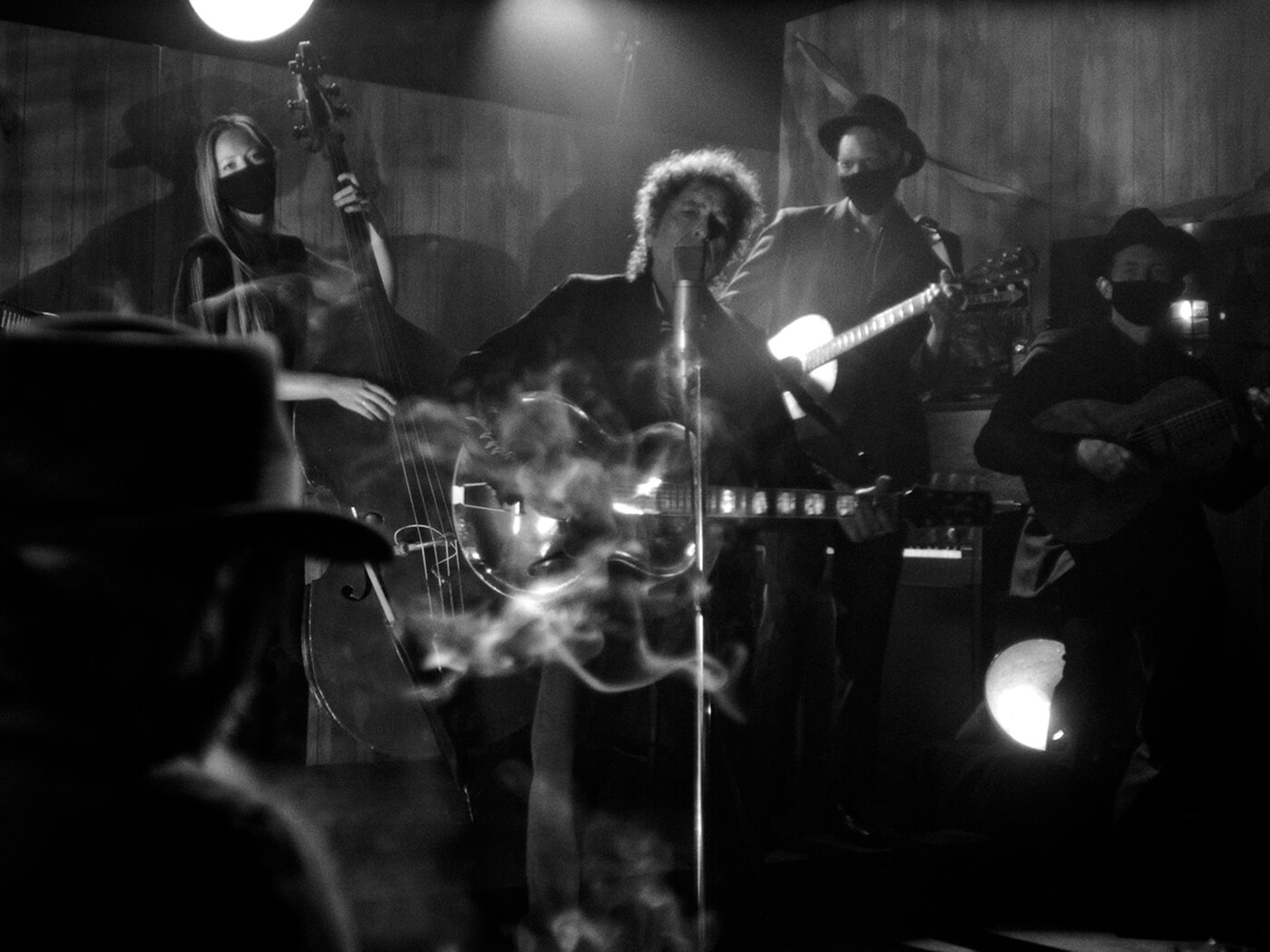 Over the past decade, Bob Dylan has been working on an ongoing series of paintings he calls The Beaten Path, devoted to depictions of a particularly American landscape that’s probably on the edge of disappearing forever, but which he stubbornly insists still stubbornly exists, if you only looked: a handmade place of lost highways and forgotten barrooms and city lights in smeary rain; of lonely drive-in movie lots and funky diners and juke joints that all seem to float in some unfixed time that could be anywhere from the early-1930s to early tomorrow morning.

Shadow Kingdom – the title Dylan has given to his “Exclusive Broadcast Event” for the Veeps livestreaming service – looks and sounds like it could be taking place inside one of those paintings; except that where Dylan’s canvases vibrate with solid colour, this show takes place in a shimmering, liquid black and white world. Directed by Alma Har’el, the setting is a small roadside dive, with Dylan and his band crammed onto a tiny stage or shoved into the corner of the chequerboard floor, playing to a scattered audience of comically chainsmoking patrons who seem vaguely disinterested to begin with, stay that way for most of the time, then finally start dancing under the paperchains strung across the ceiling just as time begins to run out.

As well as Dylan’s paintings, the setting stirs up a kaleidoscope of associations: of the Depression-era staging for Girl From The North Country, the recent Broadway musical based on Dylan’s songbook by playwright Conor McPherson; of Dylan’s 1983 video for “Sweetheart Like You,” set in an empty dive; of a half-hour black-and-white TV special that Dylan made back in 1964 for the Canadian series Quest, in which the 23-year-old singer played his songs in a workingman’s bunkhouse while weary woodsmen drank and smoked cigarettes and ignored him; and of an incredible performance one of Dylan’s acknowledged masters, Howlin’ Wolf, filmed for The American Folk Blues Festival that same year, set up in the corner of an abandoned afterhours barroom.

Increasingly, too, the whole scene – sometimes hilarious, sometimes disqueting, often both – evokes the kind of deeply-felt surrealist-noir-Americana David Lynch has made his own.

What’s going on outside this tiny flickering bar, you wonder, and why does it feel like it’s the end of the world?

Little was known about Shadow Kingdom before the show aired, and so some basic facts seem in order. Although billed as Dylan’s “first concert performance since December 2019,” when the pandemic forced him off the road along with everyone else, this was much less a recording of a live performance than a very carefully filmed special, practically a linked set of music videos.

Dylan’s stalwart road band are absent; instead he comes backed by a new ensemble of five relatively young, incredibly adept musicians – Janie Cowen, Joshua Crumbly, Alex Burke, Shahzad Ismaily and Buck Meek, all wearing black facemasks. (Due to COVID-19, of course. Or, perhaps, to protect them from the amount of second-hand smoke getting blown their way by the audience. Or maybe because Bob Dylan just likes masks.) Usually, they assemble around Dylan in a group of four, the instrumentation largely acoustic, old-timey: accordion, guitar, mandolin, double bass, with electric guitar on standby for flashes of Chicago blues or rockabilly.

An onscreen caption promises “The Early Songs Of Bob Dylan,” a category that turns out to include “What Was It You Wanted” from 1989’s Oh Mercy – which, when you stop to remember Dylan’s performing career now spans 60 years, seems fair enough. Mostly, though, the songs are drawn from the mid-1960s and early-1970s, with Dylan digging out some tunes he’s left alone for a while, including a couple he hasn’t played live in decades: that hypnotic “What Was It You Wanted,” rendered in a way simultaneously swampy and delicate; and 1966’s “Pledging My Time,” with Dylan casting softly after the shadow of Little Walter on harmonica.

The most pertinent fact of all: with Dylan in fantastic voice, singing with the sustained power and dexterity acquired during his American songbook albums and brought into new focus with 2020’s Rough And Rowdy Ways, these songs sounded incredible.

Many have been subtly rewritten, and almost all are presented in radically altered new arrangements: a “Tombstone Blues” that broods and stops and starts, Dylan declaiming like a preacher grown used to being plagued by visions; a gorgeous, goosebumpy “Queen Jane Approximately”; a hysterical “I’ll Be Your Baby Tonight,” transformed into a pounding Vegas rockabilly showstopper, Dylan singing deadpan straight down the camera lens, flanked by two glammed-up young women, one of whom brushes lint from his shoulder without batting an eye; a helter-skelter, herky-jerky “Wicked Messenger”; a hugely poignant “Forever Young.”

“It’s All Over Now, Baby Blue” brought the curtain down after 50 timeless, too-short, minutes, leaving you wondering whether there’s more in the can ­– “The Later Songs Of Bob Dylan,” maybe?

Certainly, at the age of 80, with this performance, Dylan demonstrated that he’s still way out there, still on the beaten path. It’s not dark yet – there are no shadows without light, after all. A film for the plague times, it felt like the end of the world, and the end of the world felt great. Smoke ’em if you’ve got ’em. Got a light?

SETLIST
When I Paint My Masterpiece
Most Likely You Go Your Way
Queen Jane Approximately
I’ll Be Your Baby Tonight
Just Like Tom Thumb’s Blues
Tombstone Blues
To Be Alone With You
What Was It You Wanted?
Forever Young
Pledging My Time
The Wicked Messenger
Watching The River Flow
It’s All Over Now, Baby Blue

(All Along The Watchtower – instrumental under end credits)

from UNCUT https://ift.tt/3ezZNk9
via IFTTT

Stephen Deusner Inside the nocturnal sessions for Leon Bridges’ Gold-Diggers Sound: “It’s hard to unlock a sexy vibe at 11am” 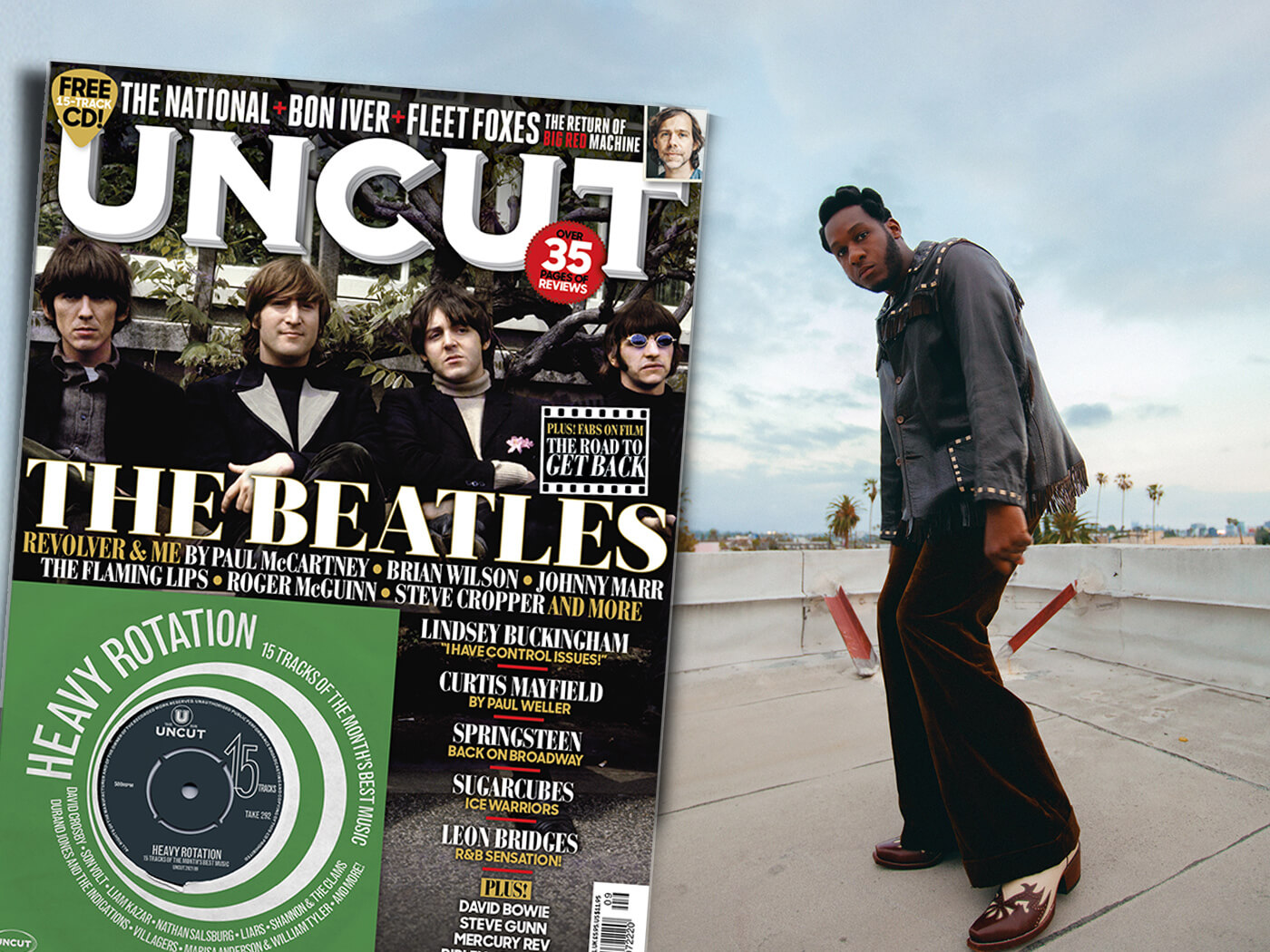 Leon Bridges walks into Cherry Coffee Shop – one of his favourite spots in Forth Worth’s Fairmount neighbourhood – and leaves the Texas humidity behind. Inside the cool, caffeinated hubbub of the shop, a wave of whispers and glances enlivens the room. This is a Leon sighting. Of course, Bridges would stand out as the best-dressed man in any room, with an impeccable fashion sense to match his music. Today he’s sporting black-and-white cowboy boots, perfectly creased black trousers and a silk bowling shirt from a team that hasn’t rolled in his lifetime. All this despite the extreme heat: “I don’t really do shorts,” he says with a laugh.

Bridges has become a local celebrity, an artist who got his start here in Fort Worth, then stayed put. He might spend long stretches on the road or out in Los Angeles, but he still considers this city to be his home, however far off the industry map it might be. Such loyalty has endeared him to locals, such that Leon sightings have lost little of their excitement despite their frequency.

“Fort Worth is cool because it has its own identity,” he says as he places his order with the barista – large drip coffee, no cream, no sugar. “Dallas aspires to be like Los Angeles or New York, but Fort Worth is totally comfortable being its own little thing. It definitely has that smalltown energy. It’s grounding to be in the place where I grew up. It’s just easy here. Whenever I’m out in LA, I just don’t understand how people even have a car and drive everywhere.”

Before he can cause a scene, he bails on the coffeeshop and walks past a barbecue joint to the Magnolia Wine Bar, another favourite hangout. “I came here a lot during the pandemic and I could just have a sense of normalcy. My routine was work out during the day, pull up to the coffee shop, then come here, get some wine, then go home.” The place is closed, but Bridges hops over the low fence and takes a seat at one of the many picnic tables on the patio.

Fort Worth, he says, allows him to keep a little distance from the hustle of the music industry. It’s also a city with a rich musical history and he feels some responsibility to honour and build on that local legacy.

“You’ve got an interesting lineage of musicians who’ve come from the area,” he explains. “You’ve got people like Townes Van Zandt. You’ve got a bunch of jazz greats who grew up in the same neighbourhood as me – Ornette Coleman, King Curtis, Cornell Dupree. But there aren’t too many soul or R&B guys from here.”

The post Inside the nocturnal sessions for Leon Bridges’ Gold-Diggers Sound: “It’s hard to unlock a sexy vibe at 11am” appeared first on UNCUT.

from UNCUT https://ift.tt/3exQ8uF
via IFTTT 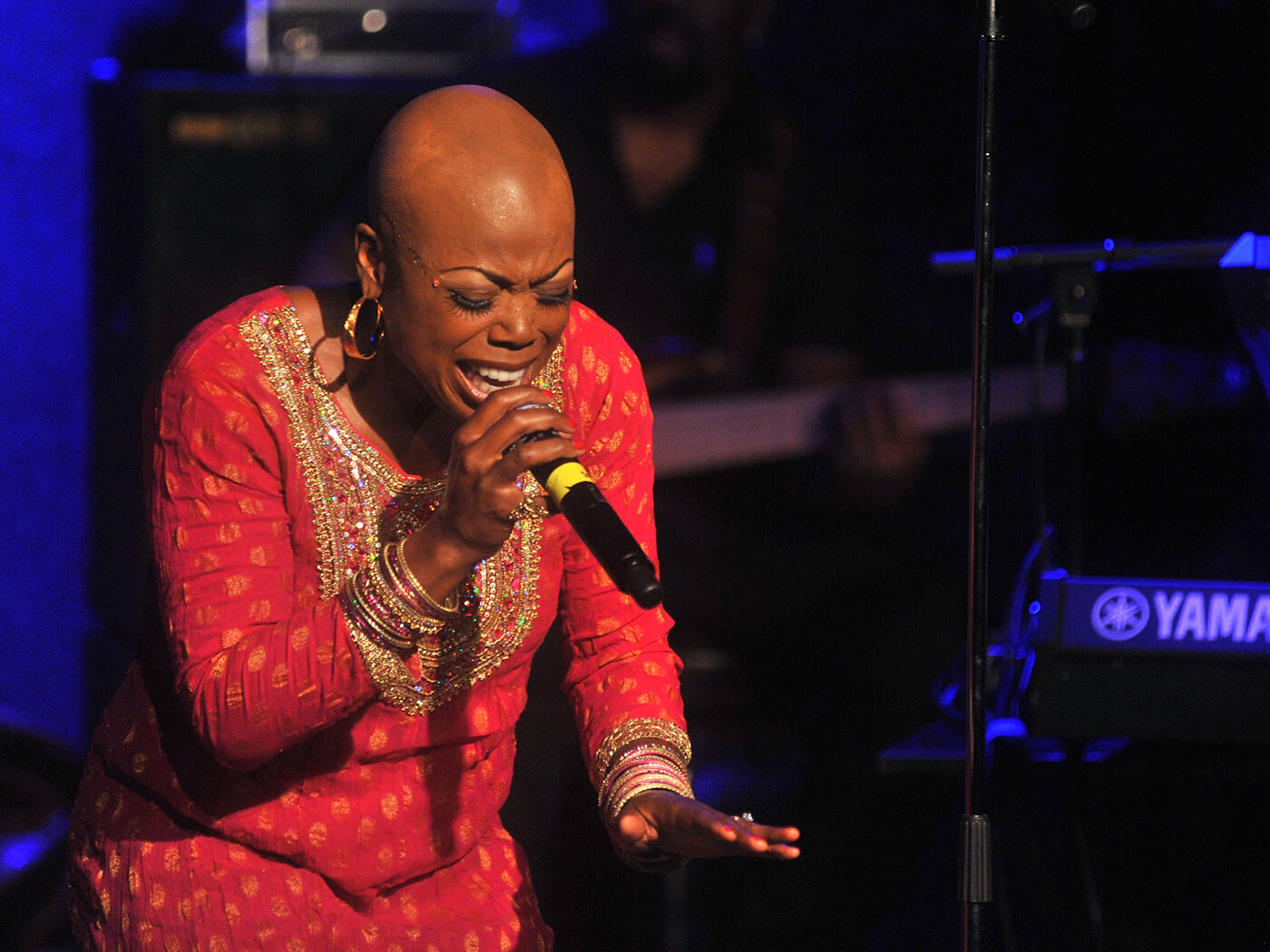 Shelby Johnson – better known to Prince fans as Shelby J – remembers being puzzled when she got the lyric sheet for Son Of A Slave Master, a blazingly outraged tune from Prince’s unreleased 2010 album Welcome 2 America. “All the verses had my name on them,” she says.

“Can this be right? He wanted me to sing all the verses then he would come in on the chorus. He just liked the way my voice sounded there. As a supporting vocalist, you always think you’re just going to be supporting, but Prince was very generous with his light.”

She compares Welcome 2 America – which is finally getting released, 11 years late – to a Broadway production, full of complex arrangements and theatrical vocal parts. Because Prince wanted to cut the songs live, she and the other singers rehearsed for hours in her hotel room before joining him in the studio. “If our parts weren’t tight, I was gonna hear about it.”

After recording the songs, Prince handed them off to the New Power Generation’s keyboard player Morris Hayes. “He called me over to Paisley Park one day, and we sat in his car and listened to the whole record together,” says Hayes, who received a co-producers credit for his work. “He cut it raw – just bass, drums, him, and the girls doing some background vocals. He told me, ‘Morris, just overproduce it and I’ll take away whatever I don’t like.’ He really liked to micromanage and stand over your shoulder.

He could be very, very impatient. It was nice not having the added pressure of him hurrying me up while I was moving through kick-drum sounds.” Prince responded enthusiastically to Hayes’ treatments, especially on a slab of ’70s funk called Born 2 Die.

The idea came to Prince while he was watching a YouTube clip of Cornel West. “Dr West said something like, ‘Prince is a bad brother, but Prince is no Curtis Mayfield,’” recalls Hayes. “Prince was like, ‘Oh, really?’” When Hayes came back with the finished song, his boss was over the moon. “Prince didn’t really throw out accolades. But when I played that song for him, he grabbed me by the shoulders and shook me and screamed, ‘This is great! You’re Duke Ellington!’”

These songs are among the most socially and politically engaged of his career, as though Prince were updating Sign O’ The Times. “He was telling his truth,” says Shelby Johnson. He would always say, ‘Shel, we gotta take care of each other.’ He was prophetic. I think he knew this album needed to wait. He knew we’d need it later. That blows my mind, but that’s just what geniuses do.”

GET THE UNCUT SEPTEMBER 2021 ISSUE HERE

The post Shelby J on Prince’s Welcome 2 America: “He knew this album needed to wait. He knew we’d need it later” appeared first on UNCUT.

from UNCUT https://ift.tt/3xTHDS7
via IFTTT